Cunt. Whore. Bitch. These are just some of the words my fellow Moms Demand Action volunteers and I have been called over the past nine years. We’ve become experts on the nexus between misogyny and gun culture because we’ve lived it—in person and online—since the day we decided to stand up to the gun lobby.

To be clear, pro-gun activists don’t disagree with us because they actually believe we want to take their guns away. They hate us because we’re women.

Rarely do the men who proclaim themselves defenders of constitutional liberty direct message me about policy. They’re much more likely to threaten me with rape or hanging. Gun extremists have told me to “go bake a cake, bitch” or to “do what all the other stay-at-home moms do” and watch TV “with a bottle of Chardonnay.” I’ve been told I’m trying to take people’s rights away just because I “got knocked up once.”

The combination of easy access to guns and misogyny in our country has deadly consequences.

In my experience, the degree of overlap between gun extremists and men who hate women is alarming—and our latest, comprehensive research shows how deep the connections go. Our report shows that for radicalized men who see violence as a means of taking back power, firearms are the tools of choice—and misogyny is a major component of far-right extremist ideologies.

Guns have long been a recruiting tool of the far right: They often get people in the door and are a vital part of extremists’ organizing strategy. So does misogyny. Bonding over a hatred of women, or frustration with their inability to control them, gets men through the door, too. Once there, the anger and resentments grow, and talk can turn to action. The combination of easy access to guns and misogyny in our country has deadly consequences.

In 2014, a man active in the misogynist online “Manosphere” killed six people and wounded 14 others in Isla Vista, CA. In 2021, a man shot and killed eight people, six of whom were Asian women, in a rampage in Atlanta because he believed the spas where they worked were temptations for “sexual addiction.” And last month, a man with a history of misogynist views shot seven people, five fatally, in Denver.

Surveys of young men have found that perceived threats to individual men’s sense of masculinity and their social status as a group are associated with both attraction to firearms and fantasies about mass murder. While groups of men who think this way have always existed, the internet has helped accelerate and further radicalize these views.

Every country is home to misogynists. But only our country’s gun culture—and weak gun laws—allow and encourage men who hate women to heavily arm themselves. It’s unsurprising, then, that women in the U.S. are 21 times more likely to be killed with a gun than women in other high-income countries.

An average of 57 women in the U.S. are shot and killed by an intimate partner every month, with many more shot and wounded. Our research shows that men who abuse women go on to kill others as well: In at least 53 percent of mass shootings between 2009 and 2020, the perpetrator shot a current or former intimate partner or family member—many of them women and children.

Congress has the opportunity to act now to address the urgent threat of violence against women.

The data and research showing the connections between misogyny and gun violence have never before been made so clear. For too long, violence against women hasn’t been treated as the serious threat to our society it is. There is something inherently dismissive about putting “domestic” in front of violence, as if brutality at the hands of a man she knows somehow makes it less deadly. Nothing could be further from the truth, and firearms are abusers’ weapons of choice. In fact, access to a gun makes it five times more likely that an abuser will kill their female intimate partner. Calls to domestic violence hotlines have increased as the pandemic traps women and children at home with abusers.

The Senate is expected to unveil a bipartisan bill that would reauthorize the Violence Against Women Act (VAWA) and address the so-called “boyfriend loophole”—the failure in federal law to prohibit abusive dating partners who have not been married to, lived with, or had a child with the victim from obtaining or possessing firearms. While the reauthorization of VAWA has fallen victim to partisan bickering for years, Congress has the opportunity to act now to address the urgent threat of violence against women and give support programs the vital funding and resources they need. 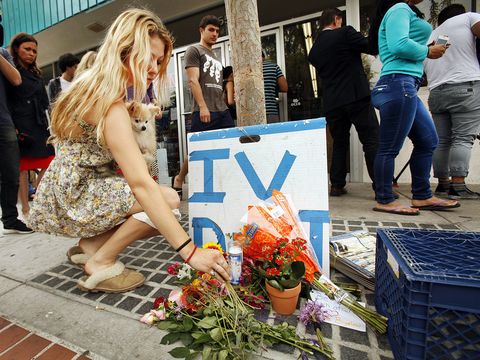 A University of California, Santa Barbara student lays flowers a memorial for victims of the Isla Vista shooting.

We’ll never become accustomed to the misogynistic threats we receive, but we have learned to organize in defiance of them. Nearly a decade into this fight, we’ve been threatened with sexual violence, had our emails and social media accounts hacked, and had our home addresses and the names of our children’s schools published online. We’ve had armed extremists show up at our events and sit in the front row, and men draped in camo and ammo stare us down outside of statehouses across the country.

Exposing the links between misogynist extremism and the far-right extremism movement is more urgent than ever, because both continue to proliferate online—and both pose grave, real-world threats. It’s scary to be targeted by gun extremists, but it’s much scarier to live in a country with lax gun laws that put women and children at risk. In spite of the men who hate us, we won’t be intimidated in our fight to keep our families safe. These threats, while unhinged and hateful, are proof that the gun violence prevention movement is winning.

Shannon Watts
Shannon Watts is the founder of Moms Demand Action and the author of Fight Like a Mother: How a Grassroots Movement Took on the Gun Lobby and Why Women Will Change the World.