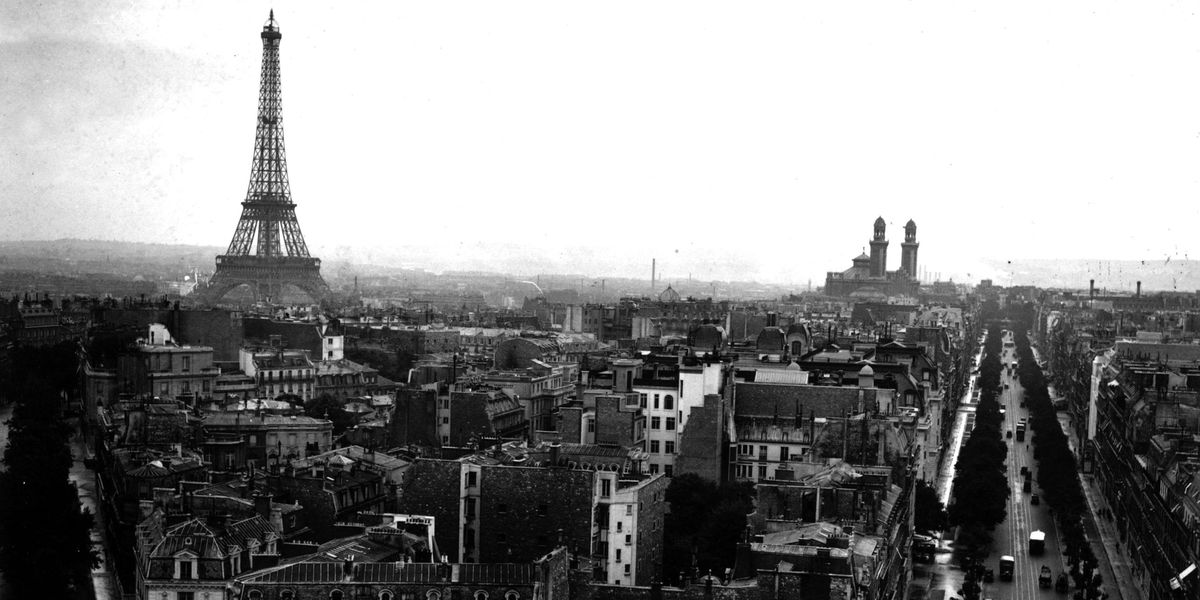 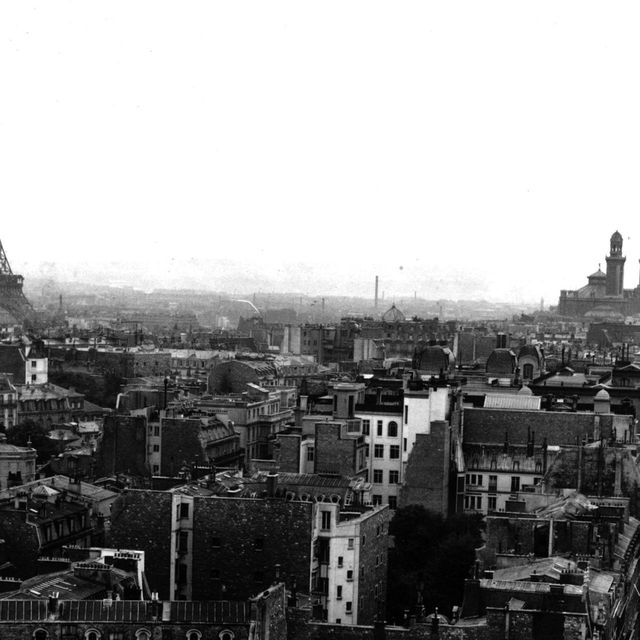 Throughout history, Paris has been through many times of turmoil and destruction—the Paris Commune of 1871 destroyed many of the city’s historic buildings and World War II subjected the city to heavy bombing. But Paris remains as resilient as it is romantic. Here, we take an intimate look back on the evolution of the city of lights.

The town square in front of the Gare de l’Est, a railway station in the 10th arrondissement, is busy with crowds of people. The Gare de l’Est was completed in 1849 and was called the Strasbourg Platform until 1854.

Light shines in through the stained glass windows at the nave of Notre-Dame in 1870. Still today this is one of the most photographed views of the Medieval Catholic church.

In 2019, Notre-Dame temporarily closed due to a fire that broke out beneath the cathedral’s roof. The roof and spire of the structure were destroyed, but the altar, rose windows, and 13th century pipe organ sustained no damage. Renovations are underway and the church is expected to reopen in the spring of 2020.

The Bois de Boulogne is one of Paris’s largest public parks running along the edge of the 16th arrondissement. A staple of the park is the large lake in the center, as seen here, which was given to the city of Paris by the Emperor Napoleon III in 1852.

Construction workers stand with slabs of concrete in front of the Paris Opera House as its being built. After 15 years of construction, the landmark building was completed in 1875 and is still in use today as one of Paris’s premier venues.

Builders broke ground on Gustave Eiffel’s vision of the Eiffel Tower in 1887. By the following year, you can see they had already made a lot of progress. Construction was relatively quick and only took three years for the unique steel structure to be completed. Interestingly enough, the tower’s bold design was seen as an eye sore to most Parisians at first.

Although it was not well received by the public, the Eiffel Tower was completed for the 1900 World’s Fair, which was hosted in Paris.

Taxi drivers crowd the bridges on the Seine as they strike beneath the Eiffel Tower against a newly passed regulation that favors larger companies over individual drivers.

A Parisian woman enjoys a nice sunny day in the Parc de Bagatelle.

Friends drink coffee as they sit on the terrace of a café. Parisian cafés have long served as the cornerstone of the city’s social and cultural identity since the 17th century.

Founded in 1889, the Moulin Rouge nightclub hosts cabaret and burlesque performances and was Paris’s first electrically operated building. After a devastating fire in 1915 burnt almost the entire structure down, the popular club reopened in 1921.

A group of fashionable women wrapped in ostrich feather stoles⁠—very on trend for the moment⁠—wait by the entrance of the horse races at Auteuil.

An aerial view of Paris shows the city’s circular arrondissement system, as well as a view of the Eiffel Tower.

The platforms at the Gare du Nord train station are flush with people as they depart from one of Paris’s six train stations.

A group of tourists look out at the Champs Élysées from the top of the Arc de Triomphe. The arc was erected in 1836 at the center of the Place Charles de Gaulle, which is the junction of 12 different avenues.

A group of classically trained ballerinas take to the barre for Swan Lake rehearsals at the Grand Opera de Paris.

A woman sells flowers from a cart on the streets of Paris.

A view from the top of the Stairs of Montmartre. The series of stairs run all the way to the top of Sacré Coeur.

Tourists use binoculars to get a closer view at the city below as they peer out from the top of the Eiffel Tower.

A local walks down a long stretch of one of the Parisian Arcades by Rue Rivoli.

Rita Hayworth and her daughter, Rebecca, take a stroll through the streets of Paris on a visit in 1950.

A woman blocks the sun with a parasol as she works on a painting on one of the city’s blocks.

A woman, fit for the runway, catches the eyes of onlookers as she crosses the Rue De La Paix.

Here, a woman is seen on her daily commute on one of the city’s buses.

A group of fashion models dressed in the season’s latest collection pose along the Seine.

A glimpse at one of Paris’s back streets off of Saint Germain proves to have just as much charm as the city’s bustling main streets.

A group of tourists stroll along the Trocadéro across the Seine from the Eiffel Tower.

French model, Suzette Clairy, goes for a drive through the streets of Paris in a small car fit for two.

A group of well-dressed women use Paris’s grid-lock traffic as an opportunity to pose in their convertible.

Paris’s Hôtel de Ville, located in the 4th arrondissement, has been used as the city’s political administrative building, or City Hall, since its completion in 1628. The current building was rebuilt in a Neo-renaissance style in 1892 after it burned during the Paris Commune of 1871.

French writer, Francoise Sagan, poses against a flyer-filled wall on the streets of Paris in 1955.

The 17 Best Jeans Secretly Sold on Amazon
Everything You Need to Know About <i>Do Revenge</i> Starring Maya Hawke and Camila Mendes
John Travolta Posts a Heartbreaking Tribute to Olivia Newton-John After News of Her Death
From YouTube to Hollywood: How Claudia Sulewski Became a Modern-Day Screen Queen
<i>Grease</i> Star Olivia Newton-John Has Passed Away at 73 Years Old