In a normal year, the first Monday in May is a holiday in the fashion world. That illustrious date is usually home to the Metropolitan Museum of Art’s annual Costume Institute Gala (also known as the Met Gala). On paper it’s a fundraiser event, but to the rest of the world it’s a celebrity extravaganza, one of the most star-studded gatherings of the year. In 2020, the event—like much everything else in 2020—was canceled due to COVID-19.

But in 2021, the party is back on, albeit in September rather than in the spring, and with a few departures from business is usual. Co-chaired by pop superstar Billie Eilish, actor Timothée Chalamet, tennis wunderkind Naomi Osaka, and the poet Amanda Gorman, the 2021 Met Gala is shaping up to be an unorthodox but characteristically eye-catching event. Below, all your questions about this year’s festivities, answered.

When is this year’s Met Gala happening?

A-listers will line up on the Met’s marble steps on September 13, the second Monday of the month. (The first was Labor Day, a national holiday and therefore less than ideal.) Vogue will stream the red carpet live for the first time ever, starting at 5:30 p.m. Eastern.

The Met Gala is perhaps most beloved for its yearly themes, which demand fashion designers and their clients get creative within distinct parameters. A good theme interpretation can make or break a guest’s look in the eyes of both fashion critics and fans, so understanding the theme is key. 2019’s theme, Camp: Notes on Fashion, sent guests scrambling to decipher what exactly falls into, well, the camp of “camp,” but those who nailed the designation were well-rewarded. (See: Lady Gaga’s four-outfit entrance, Janelle Monáe’s blinking Picasso-inspired gown, and Kacey Musgraves in a life-size Barbie ensemble.)

This year’s theme is ostensibly more straightforward: “American Independence.” At second glance, however, this is a nuanced, even tricky theme to master, especially as our nation reels from an ongoing pandemic, a disastrous retreat from Afghanistan, and the ever-looming influence of the Trump era on our national psyche. September 13 is only two days after the 20th anniversary of 9/11. “American Independence” is an unavoidably weighted term.

The hope is that the theme inspires a clever, subverted wardrobe rife with bold statements, rather than a tacky, stereotypical line-up of reds, whites and blues. Most guests will likely opt to wear classic American designers such as Tom Ford, Michael Kors, Proenza Schouler, Carolina Herrera, Marc Jacobs, Ralph Lauren and Oscar de la Renta. But others might lean toward a newer vision in American fashion, pulling from looks by Christopher John Rogers, Pyer Moss, Telfar Clemens, Colin LoCasio, or Collina Strada. The goal is for the fashion to mean something, and that makes this year’s theme doubly exciting.

The Institute announced that this year’s gala would be more “intimate” compared to past events—presumably due to the coronavirus pandemic. Only about 400 guests will arrive at this year’s gala, and the attendee list is a secret up until the moment the doors open.

That said, reporters have been doing their darndest to keep tabs on who’s coming this year. The New York Times recommends keeping an eye out for ASAP Rocky, Simone Biles, Lourdes Leon, Tracee Ellis Ross, Taraji P. Henson. Other rumored guests include Jennifer Lopez, BLACKPINK’s Rosé, and Rihanna. Those expected to skip the event include Zendaya, Selena Gomez, and Dua Lipa. 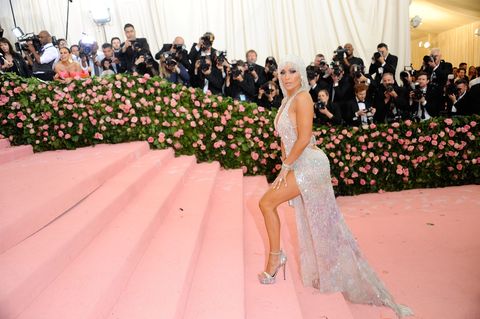 The pandemic’s still ongoing. Is it safe to have the Met Gala right now?

That’s, of course, up for debate, but the event is taking several precautions to keep guests safe. Anyone attending the event must be vaccinated and receive a negative COVID-19 test before admittance. Dinner tables will be socially distanced, and guests must also wear masks when not eating, which means we’ll likely see some interesting riffs on the N95 this year.

The exhibit will “feature women’s and men’s historical and contemporary dress dating from the 18th century to the present in vignettes installed in select period rooms,” according to a statement released by The Costume Institution. The museum announced they would open the American Wing for the second exhibit, which will host around 550 guests, pending government guidelines.

With that description, it’s possible next year’s Met Gala will continue with the “American” fashion theme, but with a more historic, period-centric twist.

Who are this year’s co-chairs?

Rumors of Gorman’s involvement stem back for months: Page Six reported in early April that Gorman, the poet at Joe Biden’s inauguration and the National Youth Poet Laureate in 2017, was being considered to host the post-pandemic 2021 Met bash. The 23-year-old has become a breakout star since she performed her original piece titled “The Hill We Climb” at the January 20 ceremony. She also performed an original poem at the Super Bowl in February this year. On May 3, Vogue officially confirmed she’d be one of four co-chairs, along with the 19-year-old Eilish, 25-year-old Chalamet, and 23-year-old Osaka.

“Each of the Met’s four co-hosts embodies the defining factor of American style: individualism,” Vogue wrote of the selection. “They may approach the concept differently, but their shared passion for expressing themselves through clothing connects with the exhibition’s theme. Chalamet, Eilish, Osaka, and Gorman have all developed a distinct visual language for their public personas, one that is informed by the legacy of iconic fashion made in the U.S.A.”

Where can I get a ticket?

Unless you’ve made a smash in the film, music, TV, tech, politics or fashion industries within the last year, it’s likely you haven’t earned a seat at the table. Don’t fret. The event will be streamed live, and you can follow along with ELLE‘s coverage to see all the best looks in real time.