The final ten minutes of the Haunting of Bly Manor finale pack in a couple of big emotional twists, as the significance of the wedding sequence that bookends the show finally becomes clear. When the series first picks up with Carla Gugino’s character narrating a ghost story—which becomes the main story of the show—to guests at a wedding in Northern California, it’s not clear how she, or any of the characters around her, connect to the central story.

Although eagle-eyed viewers may have figured this out much earlier on, the identity of the Narrator is confirmed during the finale. Carla Gugino is playing an older version of Amelia Eve’s Jamie, the gardener at Bly Manor who falls for new au pair Dani (Victoria Pedretti). Her narration takes on a poignant new significance as you realize she’s telling this story as a kind of therapy, years on from losing Dani to Bly Manor’s haunted lake.

But Jamie isn’t the only familiar face at the wedding. In the very final moments of the show, it’s revealed that several of the attendees are older versions of characters we know, including Owen, Henry, and Miles. And the bride, who’s been calmly listening to Jamie’s story? That’s Flora, who’s forgotten everything about her time at Bly Manor, and reacts to the story as though she’s hearing it for the first time. 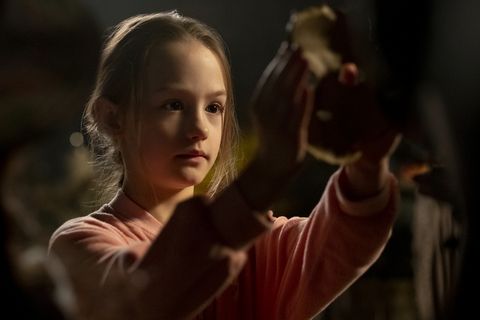 The setup for this twist comes about halfway through the episode, when Dani and Jamie visit Owen at his bustling Paris bistro. Henry, Miles, and Flora have moved across the pond to America, and Owen tells them that during a recent visit, he noticed both children have complete amnesia about what happened at Bly Manor. “They know they used to stay at Bly when they were children,” he says, “but the details, the specific moments, the fear of it all that we were so afraid would infect the rest of the lives, has just faded away.” Which, given that both Flora and Miles were intermittently possessed by ghosts and came close to dying, is a blessing.

Not only has the adult Flora forgotten everything about what happened at Bly, but she’s also grown up into someone who is terrified of ghosts. Her wedding venue is a castle that’s allegedly haunted, and she refuses to stay there overnight because she’s so freaked out by the stories she heard about ghosts. “I love a good ghost story, I just don’t want to sleep in one,” she shrugs—a wild statement, because she spent so much of her childhood existing inside a truly terrifying ghost story, and was remarkably unafraid. Instead of cowering in her bed like the average child would in a haunted house, Flora figured out how to safely navigate around The Lady in the Lake using her dollhouse, and even tried to keep the adults around her safe too. 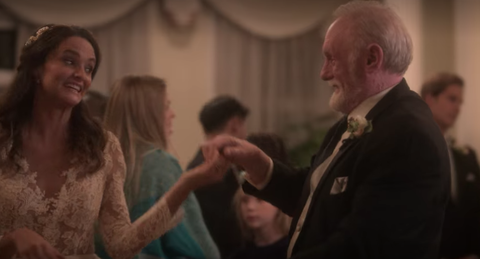 Grown-up Flora dances with Henry at her wedding in The Haunting of Bly Manor finale.

But now, Flora doesn’t even seem to remember the name Bly Manor. She notices that her middle name is the same as the little girl in Jamie’s story, but shrugs it off as a coincidence. Denial is a big theme throughout Bly Manor, and the dark reading of this ending is that Flora and Miles are only able to cope with the trauma of what happened to them by living in complete denial.

But the more optimistic version—and the one the show seems to be going for—is that Flora and Miles were spared. After Owen reveals they’ve forgotten everything, Dani asks if he thinks Henry will ever tell them the truth, and Owen says he’d let them be. “Let them live their lives the way they should, without anything hanging over them.” (This is a rough pill for Dani to swallow, since she’s been living with a shadow hanging over her ever since she invited The Lady in the Lake into herself to save Flora).

So Flora is able to grow up and live the uncomplicated, happy life she deserves, and listen to Jamie’s story as though it were just another ghost story. But her strong emotional reaction to the story, as well as her dialogue in response to it, suggests that on some very deep, visceral level, she feels the significance of it. “You said it was a ghost story,” she tells Jamie. “It isn’t. It’s a love story.” Flora understands the story on a gut level. She feels it in her bones, even though she may never remember why.