Spoilers for season 2 of The Umbrella Academy ahead.

“Did we actually… succeed at something?” Klaus Hargreeves (Robert Sheehan) asks in near-tearful disbelief in the final scene of The Umbrella Academy season 2, as he and his siblings hurtle back through time into what appears to be 2019. You can’t blame him for being incredulous—so far, the super-powered Hargreeves siblings have accidentally caused an apocalypse twice, and their time travel efforts have literally never gone to plan. Sadly, this brief moment of relief is short-lived. Here’s a rundown of what’s going on in the twisty final scene of season 2.

What happened at the end of The Umbrella Academy season 2?

After reuniting in the 1960s to defeat The Handler (Kate Walsh, absolutely living her best Cruella de Vil life in this role) and save the Earth from a nuclear apocalypse, there’s still no rest for the Hargreeves. The entire family shoots right to the top of the November 1963 list of Most Wanted Fugitives, because they’re all (mistakenly) believed to be co-conspirators with Lee Harvey Oswald in the JFK assassination. Sensing that it’s time to skedaddle back to their own timeline, the fam join hands and jump into a time portal created by Number Five (Aidan Gallagher), who has the power to transport himself and others through time, but has a less-than-stellar track record when it comes to accuracy.

Miraculously, the gang appears to end up back in 2019 where they belong, at Umbrella Academy HQ. Even more miraculously, they arrive on April 2, 2019—the day after the season 1 apocalypse they narrowly avoided by jumping back through time into the 1960s. Since the world is still intact, the Hargreeves crew seem to have accidentally stumbled their way into saving the world not just once, but twice.

“This is not your home,” he tells them. When Allison (Emmy Raver-Lampman) points out they’re in the Umbrella Academy building and obviously their home, Hargreeves replies: “Wrong again. This is the Sparrow Academy.”

What is the Sparrow Academy?

Based on the very little we see in that final scene, it’s an alternate—and apparently superior—version of the Umbrella Academy, led by Ben. Five shadowy figures emerge onto the landing behind Ben, and although we don’t see their faces, the familiar posture suggests they’re an alternative version of the Hargreeves kids. The sixth figure on the landing appears to be some kind of floating, glowing green box, which…sure.

So let’s go back to the 1960s for a second. When the gang arrived in the past, Number Five and Diego (David Castañeda) discovered that their father was seemingly involved in the JFK assassination. At the time, Sir Reginald was a much younger man with no interest in adopting children whatsoever, and was deeply unimpressed to be confronted by a gang of randos claiming to be his future kids. He also seemed vaguely horrified by the idea that years into the future, he would adopt seven mutant super-powered children, and bluntly tells Luther (Tom Hopper) that if he ever did, he’d make sure he never had a son with such grotesque simian proportions. As ever, the Father of the Year award goes to… 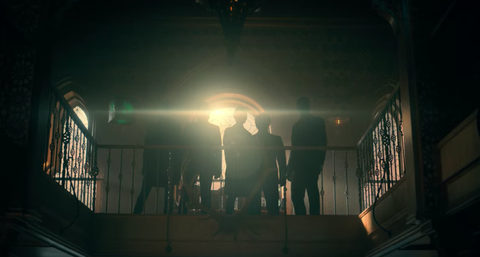 But Sir Reg did reluctantly end up spending a fair amount of time with his future kids, most memorably over an awkward dinner in episode 206. And as any sci-fi fan worth their salt knows, it’s very hard for anyone to time travel into the past without changing the future—all the more so if you’re casually hanging out with your own future parent.

Hargreeves presumably spent enough time with Luther, Diego, Allison, Klaus, Five, and Vanya (Ellen Page) to conclude that he needed to do better. He was able to observe their behavior and neuroses and come up with corrections, essentially learning from his previous mistakes without having actually made them yet. (Thanks, time travel!) In other words, by interacting with their own future father so much in the 1960s, the Hargreeves may have accidentally erased their own existence. Which is, if nothing else, extremely on brand.

The Umbrella Academy graphic novels offer some hints about what’s next. Towards the end of the most recent third volume, The Umbrella Academy: Hotel Oblivion, a group of mutant siblings known as “The Sparrows” make their debut. Much like in the show, the gang appears at the very last minute, meaning we learn very little about them. 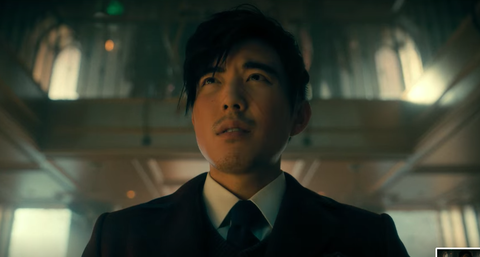 Will The Umbrella Academy season 3 have a new cast?

Since the onscreen Sparrow Academy crew are kept in shadows except for Ben, there’s a big question mark around their identities. Will they turn out to be doppelgängers of the existing Hargreeves, only stronger and better trained and more emotionally well-adjusted? Or will they be different people entirely? Remember that Luther, Diego, Allison, Klaus, Five, Ben, and Vanya were just seven of the kids born in the mysterious event on October 1, 1989, when 43 women simultaneously gave birth despite never having been pregnant.

Earlier in the finale, the discovery that Lila (Ritu Arya) is “one of them” was a reminder that there are dozens of other mutant kids out there—any of whom Sir Reginald could’ve decided would make a better fit for his new-and-improved superhero team.

Showrunner Steve Blackman was asked about the identity of these new characters, and seemed to give a definitive answer. “I will only say this given the fact that some of this is in the graphic novel,” he told Inverse. “But they are new people. They’re not our characters. They are different people, and that’s all I can really say.”

In any case, your existing faves likely aren’t going anywhere, but expect plenty more excruciatingly awkward family dinners with this new bunch when the show returns!

Dawn Porter on ‘The Way I See It,’ Her New Documentary That’ll Make You Long for the Obama Years
What Does the Future of Modeling Look Like?
Harlem’s Fashion Row Designers Created the Coolest Kids Collection
4 Ways to Get Radiant, Even-Looking Skin, According to An Expert
Minka Kelly and Trevor Noah Seen Together in New York City Following Reports They’re Dating