Travis Scott really captured the mood of the nation when he tweeted last night, “I can’t be the only one waiting for the last episode of the undoing.” Indeed, he is not—the group chats were lit up all day in anticipation of the big reveal: Who killed Elena Alves?

Tonight’s The Undoing finale will clear up any lingering questions about the murder, director and executive producer Susanne Bier promises, including whether Grace (Nicole Kidman), Jonathan (Hugh Grant), and even Henry Fraser (Noah Jupe) were involved in it. And though she’s not dropping any more hints, the famed director of After the Wedding, The Night Manager, and Bird Box shared some insight into her directing process, how to juggle multiple murder suspects onscreen, and why, exactly, everyone is so obsessed with Nicole Kidman’s green coat. Below, she answers all our burning questions about the most talked-about show of the season.

Your work often delves into the moment a person’s semblance of normalcy is uprooted and rearranged. What was the draw of The Undoing, both within and outside of that framework?

When HBO approached me and said that they were doing a project that David Kelly was writing for Nicole, that was a huge draw. And then the notion, as you mentioned, is another big draw because it’s very oddly recognizable—not in that dramatic sense that it is within the script, but in a sense of being thrown into something where you think you know and understand the role, and then the role has a completely different shape from what you anticipated.

How do you craft that tension, getting to the point that everyone is just a second or two away from melting down?

It’s very much about making sure that the tension is there. How can I compare it? If you have somebody who is drunk and who gets home, then this drunk person is going to do everything they can in order to hide that they are drunk. It’s a little bit like that. You want to fight it and because you fight it, it’s much more palpable and oddly more visible, even if the person fighting it thinks it’s much more hidden. 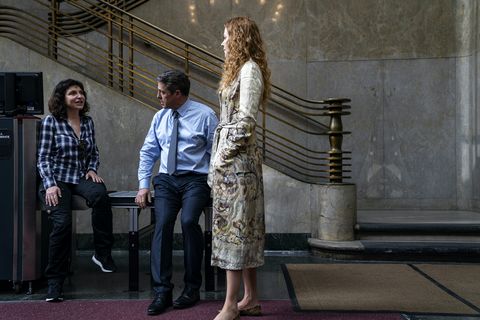 Bier on set with Hugh Grant and Nicole Kidman.

The big cliffhanger at the end of episode 5 is quite the blindside. It’s very quiet and feels routine, but then you get this big reveal. How did you approach shooting that?

At this point, because it’s episode 5, we’ve gotten used to, Oh, there’s going to be a cliffhanger. I wanted to do the opposite. I wanted to go, Oh, okay. Maybe the cliffhanger was the call with the mother. I wanted the audience to be a little bit relaxed, then throw it in at the very end.

So, what can we expect from the finale?

All I can say is that you will get to know how it ends. We’re not cheating you. You will know what happened.

Let’s talk about building out Grace’s world—are you sick of talking about the green coat yet?

[Laughs] No, I’m not. It’s interesting because I had told the costume designer, Signe Sejlund, that we needed a very distinct coat for Nicole. And right away when I started reading, I was like, “She needs to have that big red hair.” I kept bugging the costume designer about that coat because I felt that, until we had that coat, we didn’t know who she was. It was a key to her character. She doesn’t look at all like the other moms in school. She doesn’t dress conventionally upper class at all. She dresses a bit bohemian, but there’s still a sense of… Nobody is thinking it’s a throwaway coat. It looks classy, but it’s not recognizable as a certain designer. That added to her being very unlike everyone else, which was really important.

How did you ensure Elena’s presence felt ghostly, like a haunting? You can’t get away from her face. Why did you decide to make her such a visual presence on the show?

She grew a lot on us because she’s so enigmatic and interesting. It seemed a bit interesting to have a ghost, but also, she’s a bit like Brigitte Bardot. She has a sultry, old-school beauty, which is so different from that whole New York environment, which is much more controlled and athletic, in a way. She’s got that very deep sense of longing. And it was also a reminder of something we possibly all carry but we try not to deal with.

How did you go about creating the visual language for the “flashback” moments Grace is imagining? Jonathan sleeping with Elena, the moment Elena is killed… Were they part of the script originally?

There was an element of flashback in the script. I can’t remember which ones were in the script and which ones were done later. When you’re shooting, you go, Oh, it would be interesting to have this. And then you take a note of it. But it was very much playing with that balance of, what do we know? What do we not know? What do we imagine? What is real? What is not real? And then making sure the audience has that weird sense as well—of not being quite sure of what to trust and what not to trust, exactly like what Grace has. Or actually, what a number of the characters have.

Because you’re juggling so many threads in this story, anybody could be the murderer. How do you ensure each suspect gets the right amount of screen time without saying too much?

I mean, I have a brilliant screenwriter who tailors it very elegantly. But when you’re shooting it and editing it, you make sure that when the character looks at the other character, they look a little bit longer than maybe they normally would. Or a hand is seeming relaxed—until you are in closer with the hand, and then you see this person is not relaxed. It’s very much about contradictions. Everything in that language is about contradiction. You tell one thing with one kind of image and then you reveal something with another image that makes you see the first image in a completely different light. 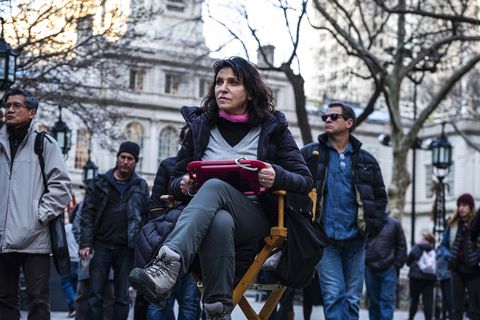 What does the editing room process look like for you?

I try to spend a long time in editing, not over-engaging. The thing for me as a director is very much about maintaining that fresh eye and that sense of, How is the audience, who has never seen it before, going to react? I try at all times to be super detailed and super engaged, but also keep a distance. I don’t want to read the script too many times. I don’t want to see the edit too many times. At the very, very end, everything is excruciatingly detailed. I always go, “Let’s just change this one frame for one, which is slightly different.” If you, as a director, don’t have those fresh eyes, things get boring. It’s very dangerous.

How did you decide to ask Nicole to sing the credit song?

[Laughs] I don’t know! We were playing around with the credits and I was like, What is this? And what should it be? Then I started hearing that song and imagining Nicole singing it. And I was like, “I’m just going to ask her to do it.” And she was like, “What?”

Julie Kosin
Senior Culture Editor
Julie Kosin is the senior culture editor of ELLE.com, where she oversees all things movies, TV, books, music, and art, from trawling Netflix for a worthy binge to endorsing your next book club pick.

The Link Between the Capitol Insurrectionists and Abusers
How That Iconic Gucci Moment in Saweetie’s “Best Friend” Video Came to Be
All About Lori Harvey, Michael B. Jordan’s Girlfriend
Melanie Martinez Sings Kehlani, Fiona Apple, and Christina Aguilera in a Game of Song Association
Jason Sudeikis Is Reportedly ‘Desperate’ to Win Olivia Wilde Back and Hopes Harry Styles Gets ‘Bored’ of Her