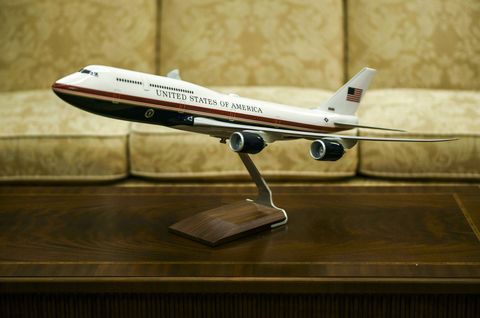 CNN’s Senior Diplomatic Correspondent Michelle Kosinki tweeted out a photo of today’s meal served aboard Air Force One and I have some concerns. The photo includes a salad topped with what looks like a pepper cut to look like a Jack-o-Lantern and filled with… maybe butternut squash? And a goat cheese spread? Looks mighty tasty, to be honest, though I do feel like encountering the majority of raw orange pepper on a salad plate feels like a daunting epicurean experience. But I’ll allow it.

I have major concerns, however, about what is going on in the top left corner of the photo:

My first thought, and I’m not ashamed to admit this, was “That’s an unseasoned chicken thigh.” Would it surprise me that that is what Trump would want? Not in the least. Did it still terrify me? In my bones.

Others in the ELLE.com Slack channel had other ideas:

That said, we have to pay respect to the fine chefs aboard Air Force One who routinely put out gourmet meals for a president who has no palate. There’s no shade intended toward them. In his book, Thanks Obama, former White House speech writer David Litt rapturously recounts some of the delicious meals he had on-board. Last year, he told ELLE.com about his favorite AFO dining experience: “I have to mention this one time, during a POTUS trip in Kansas City, when they brought like 1500 pounds of barbecue from Oklahoma Joe’s on board. That’s one of the best meals I’ve ever had. Plus it means that I get to drop things like, ‘These are the best ribs I’ve ever eaten except for on Air Force One’ into conversation.”

Whatever was on the small plate today, congratulations to those who ate (and hopefully enjoyed) it for having a culinary-themed flex to drop into casual conversation from now on.

These Wide-Leg Jeans Are a Chic Answer to the Denim Debate
The 17 Best Jeans Secretly Sold on Amazon
<i>Bodies, Bodies, Bodies</i> Will Make You Question Your Closest Friends
Rihanna Sports a Leggy Little Black Dress and Raf Simons Shirt on a Date With A$AP Rocky
Meet Simi and Haze Khadra