Queen Elizabeth has invited Prince Harry and Meghan Markle to the 70th anniversary of her time on the throne, aka, the Platinum Jubilee celebrations, next summer, The Daily Mail reports.

The Mail on Sunday says that Meghan and Harry are reportedly planning to attend the Trooping the Color, the Queen’s official birthday parade. Outside of the parade, there will be other events between Thursday, June 2 to Sunday, June 5, 2022.

The Mail notes that the balcony appearance is typically limited to a certain number of people, and whether Harry and Meghan will be with the rest of the family on the balcony has yet to be determined.

“The balcony moment will be decided much nearer the time but there’s a limit to how many family members should be on it, and I would have thought that working Royals who contribute to the family would be higher on the list than the Sussexes,” a source told the publication.

In the past, the couple has joined the rest of the family on the balcony of Buckingham Palace for the traditional Royal Air Force flypast. Meghan joined the family for the first time in June 2018, the month following her wedding to Prince Harry. 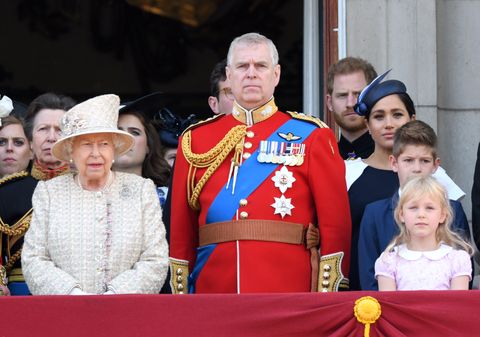 The couple didn’t attend the parade this year; it was a lot smaller than usual because of COVID-19 precautions. They also welcomed their daughter, Lilibet Diana, on June 4, and this year’s parade was on June 12.

In her and Harry’s interview with Oprah Winfrey in March, Meghan said that the Queen “has always been wonderful to me. I mean, we had one of our first joint engagements together. She asked me to join her, and I went on the train. And we had breakfast together that morning and she gave me a beautiful gift and I just really loved being in her company, and I know we were in the car—yeah, she gave me some beautiful pearl earrings and a matching necklace—and we were in the car going between engagements. And she has a blanket that sits across her, her knees, for warmth and it was chilly and she was like, ‘Meghan, come on,’ and put it over my knees as well.”

Hilary Weaver
Hilary Weaver is a freelance writer based in New York who writes about politics, queer issues, Meryl Streep, Glenn Close, and every woman the Queen has ever made a dame.

Issey Miyake Brought the Avant-Garde Down to Earth
John Travolta Posts a Heartbreaking Tribute to Olivia Newton-John After News of Her Death
Yes, I Use a Lip Mask While I Sleep
Britney Spears and Sam Asghari Respond to Kevin Federline’s Comments About Her Sons
50 Vintage Pictures Of Our Favorite Icons Enjoying Summer