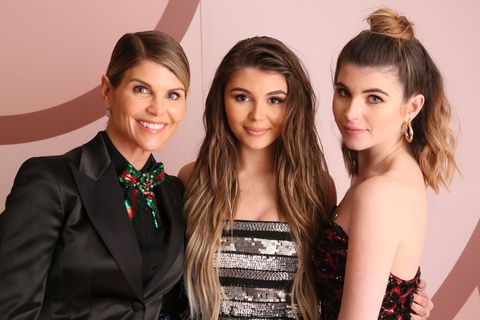 Lori Loughlin’s two daughters Olivia Jade and Isabella Giannulli have maintained silence on all their social media accounts since the news broke in March of the college admissions cheating scandal that implicated their parents. (Lori and her husband Mossimo Giannulli allegedly paid $500,000 to make it appear that Olivia and Bella were rowing team recruits to guarantee their admission to the University of Southern California.) But a couple hours ago, Bella posted her very first Instagram in months, where she wished Lori a happy birthday. Her sister Olivia Jade liked the post and commented on it.

“Happy birthday, mama. I love you,” Bella wrote. Olivia commented, “my people.” Olivia has not shared a post from her own account yet.

Lori and Mossimo pleaded not guilty in the college admissions scandal and were indicted with charges including money laundering and conspiracy to commit mail fraud. The couple faces a 40-year maximum prison sentence. They are due in court on August 27. The Mercury News reported this weekend that they plan to present a “united front” there, according to court documents it obtained.

Olivia’s relationship with Lori in particular was reported to be strained earlier this year. Entertainment Tonight reported in July that Olivia and Lori were talking now but are far from being close again. “Their family situation has improved,” one source said. “Lori knows they will all grow and learn.”

Back in May, Entertainment Tonight was told that Olivia wasn’t really talking to Lori at all because of what her mother did and how it cost Olivia her career as an influencer for the time being. “Olivia is having a very hard time dealing with this, and for the most part, she’s cut herself off from her mother and is going out and partying a lot,” a source told the outlet. “She feels she hasn’t been a part of any wrongdoing and feels tricked by her parents into going to a school that wasn’t even her top choice. Right now she wants to prove she can do it on her own, and she thinks going back to school will help renew her image.”

Bella and Lori, meanwhile, didn’t have that kind of falling out, Entertainment Tonight‘s source said: “Lori and Bella have remained incredibly close throughout and have been a wonderful support to one another. Their closest friends feel it’s been devastating to watch the effects this situation has had on their family and their relationships.”

50 Insanely Glamorous Photos of Marilyn Monroe
The Best Street Style From Copenhagen Fashion Week Spring 2023
Issey Miyake Brought the Avant-Garde Down to Earth
The 17 Best Jeans Secretly Sold on Amazon
Yes, I Use a Lip Mask While I Sleep