Isabel Sandoval makes her triumphant return with Lingua Franca, a fragile drama that burns with an understated intensity. As the writer, director, and star, Sandoval presents a candid chronicle of being an immigrant, a woman of color, and a trans woman living under the Trump administration.

Set in Brooklyn’s Brighton Beach, it tells the story of Olivia (Sandoval), an undocumented Filipino trans woman trying to secure her green card. She takes a job as a live-in caregiver for Olga (Lynn Cohen), an elderly Russian woman living with dementia. Things get complicated when Olga’s older grandson Alex (Eamon Farren) moves in and romantic feelings develop between him and Olivia.

Her first film post-transition, Sandoval shares a kindred connection with her character that translates into an authentic, breathtaking performance. Behind the camera, Sandoval revels in what’s shown more than what’s said, and while other movies that center a transgender experience tend to focus on the transition itself, Lingua Franca starts where they end, shifting attention onto a character embracing life and ritual.

As the film arrives on Netflix, Sandoval discusses getting its tone just right, combating toxic masculinity, and where the movie sits in today’s culture with ELLE.com.

The film is quiet—patient. It’s almost as if you can feel Olivia’s need for more time to resolve her immigration status quickly. What was your inspiration for the pacing of the film?

My sensibility is influenced by slow cinema, which straddles a spectrum of languorous, immersive filmmaking by certain European and Asian directors. That doesn’t mean nothing’s happening in the film. The serenity of the surface image belies the tensions roiling underneath. The real drama in Lingua Franca is subterranean. It’s interior and psychological, specifically between Olivia and Alex, which the subdued rhythm is meant to foreground. Lingua Franca is a drama of interiority. Alex and Olivia are introverted, reserved characters. They spend the film processing their own emotions and overcoming a sense of shame or guilt just enough to begin to articulate these feelings. Although “lingua franca” means “bridge language”—English would be the lingua franca for different immigrants in the U.S.—what is most essential in the film is what is left unsaid and unarticulated. The film reveals so much more in the silences and pauses in between.

This is your third film, but your first post-transition. Did you find yourself particularly vulnerable playing this character?

While it’s not autobiographical, Lingua Franca is very much a personal work. The hats I wore in making the film—writer, director, actor, producer, and editor—are the key creative roles that enabled me to translate my vision from the page to the screen without compromise. It’s a pure and authentic expression of my artistry, but I’m able to emotionally distance myself from Olivia. On one hand, the vulnerability comes from an artist’s fear of critics and the public rejecting my work, but that’s abstract and egotistical. However, as a minority filmmaker making a film as thematically incendiary as Lingua Franca, I did feel vulnerable in a more substantive and political sense. My previous feature, Apparition, was set during Martial Law in the Philippines in the ‘70s and touched on the abduction and disappearance of activists critical of then-dictator Marcos. I was writing Lingua Franca when Trump got elected, and the U.S. appeared to swerve toward authoritarianism. In fact, I considered shelving Lingua Franca but my producers convinced me to push through. They’re right: If there’s any time to make this film, that time is now.

In the film, Olga is losing her identity to dementia. How does this connect to the search for identity among the other characters in the film?

Alongside the loss of identity, Lingua Franca’s other key theme is displacement. Olivia and Olga are mirror characters—they’re both immigrant women who migrated to the United States, albeit from different generations. Olivia’s displacement is more urgent and obvious—she’s politically in limbo, an immigrant without papers as ICE agents circle her. As self-possessed as she is, she has to navigate a political system that threatens to deny her very existence because of a piece of paper she doesn’t have. Meanwhile, Olga’s displacement is more psychological as her sense of self and memory slip away. On the other hand, Alex’s arc is unlearning the modes of thinking and behavior of his macho upbringing and patriarchal privilege. He finds himself questioning its value in his life in light of his growing emotional attachment to Olivia. He has to shed off the skin of his outward machismo and burrow deep to find who he really is underneath. 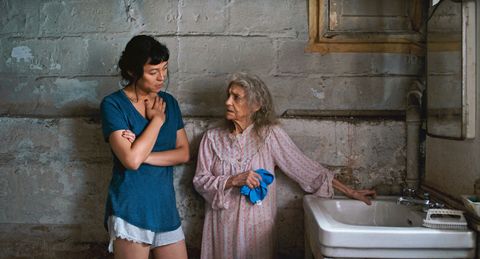 Isabel Sandoval as Olivia and Lynn Cohen as Olga in Lingua Franca.

Alex’s reaction to Olivia being a trans woman gave him room to explore his feelings in a nonviolent way. How do you hope to see this translate to audiences?

Physical violence has become a lazy trope in films about trans women, especially trans women of color becoming intimately involved with cisgender men. It’s no coincidence that these films, which also sensationalize or exoticize the trans experience, tend to be directed by cisgender men. Trans people deserve and have fulfilling romantic relationships—as Olivia’s friend Trixie does in the film—and more films and TV series should celebrate that. Nonetheless, violence in romantic relationships is not always physical. Emotional and psychological violence, like gaslighting, can be more damaging and insidious because it’s invisible. It happens between two people where there’s a stark power imbalance, and an undocumented trans woman like Olivia is a particularly vulnerable target. 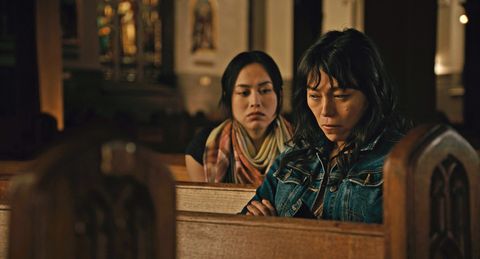 Ivory Aquino as Trixie and Sandoval as Olivia in Lingua Franca.

Alex is very much a product of his environment—a conservative Russian upbringing where there’s misogyny and transphobia. He’s anxious about his masculinity being threatened for falling in love with a woman he later discovers to be trans. The root of the urge to violence—physical or otherwise—is systemic and cultural. Men are not socialized to engage with, let alone express, their emotions, so Alex isn’t able to process Olivia being trans maturely and sensibly. Since he doesn’t know any better, he regards this discovery as a betrayal and retaliates against Olivia by exploiting her deepest fears as an undocumented person—he gaslights her. I’m not one to pontificate but if there’s one thing I’d want audiences to work towards, [it’s] dismantling toxic masculinity, and every man should start with himself.

In the film, Olivia fantasizes about Alex. She initiates the romance but then seems to back off. Why won’t Olivia fully succumb to the relationship?

On one hand Olivia’s held back by both the fear of romantic rejection but also by the greater fear for her physical safety and life, should Alex find out she’s a trans. That’s happened to me and many trans women who’ve been involved with cis men—that much about the film is autobiographical. However, on a deeper level, Olivia put up an emotional wall around herself because she’s somehow convinced herself she doesn’t deserve love. It’s a cocoon to protect herself from falling in love and being hurt, which makes it more poignant and heartbreaking. None of this is spelled out in the film, and different people will likely bring their own interpretation to Olivia’s reticence. Ultimately, I think a film’s richness and complexity lies in its capacity to accommodate a range of thoughtful, introspective readings.

How does Olivia’s intersectionality of experiences—being a trans woman, a woman of color and an immigrant—fit in with today’s culture?

Intersectionality has always been there; society is just now becoming more mindful of it. The zeitgeist is finally grappling with the concept of privilege, particularly the lack thereof, when it comes to gender, race, and citizenship. The lack of privilege in a number of ways informs my worldview as an artist. Every day I’m conscious of the fact that I’m different, that I’m the other. That awareness finds its way organically into my sensibility as a filmmaker and the stories I tell. The intersectionality of Olivia isn’t academic or theoretical. It’s lived in. As much as they engage in universally human experiences like falling in love, the characters in my films don’t exist in a vacuum. They don’t have the luxury to. They thrive in clearly defined sociopolitical milieus because those spaces are not theirs. 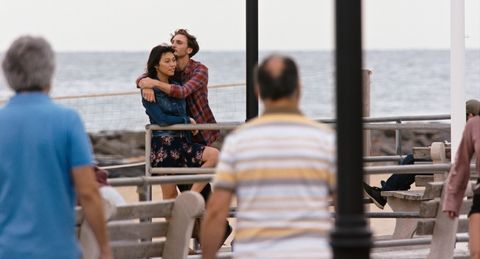 Sandoval as Olivia and Eamon Farren as Alex in Lingua Franca.

What do you hope this film accomplishes?

On paper, Lingua Franca sounds like a textbook social-issue drama so there’s an expectation of it being angry, militant, and somewhat didactic. But the film turns out to be subtle, delicate, and nuanced, unafraid to elicit emotions that may be ambivalent or contradictory. I don’t supply easy answers to complicated social issues, as tempting as that is, but I’m posing thoughtful questions. I want the audience to ponder issues like immigration and the trans experience more deeply and critically. At the end of the film, Olivia makes a decision that seems counterintuitive and impractical in light of her predicament. She may be a trans woman looking for love and she might be an immigrant looking for green papers, but she’s far more complex and layered than the sum of these parts. Her personhood transcends that.

Kit Stone
Contributor
Kit Stone is a culture writer and filmmaker based in the Bay Area.