“Shut up, and be grateful,” or so goes the general refrain lobbed at Charli and Dixie D’Amelio, the Connecticut-born sisters whose combined TikTok empire has amassed more than 177 million followers in the past two years. Charli, 17, and Dixie, 20, are part of a group of superstars relatively new to the pop culture milieu. They’re global influencers, like all modern celebrities, but their influence is relegated chiefly to video clips on social media, and the fans who love them skew heavily Gen Z. Unlike the Kardashians—to whom they’re lazily compared—the D’Amelios had no famous family members in the years leading up to their explosive popularity. They are, accidentally and conditionally, self-created.

The sisters are known for exactly one thing—in Charli’s case, easily replicated dances, or in Dixie’s, a particular brand of sultry pop—as well as all things, as chronicled on their respective profiles: where they live, what they eat, how they bond (or clash with) family members, why they break up with their boyfriends, when they spend their money, how they address their not infrequent cancellations. They’re expected to bear it all, all the time, and deal with the consequences as a result.

On the flip side, they’re living the dream. So what’s there to complain about?

That’s the question I want to address when I’m invited to meet the family in Manhattan, in the days leading up to the release of The D’Amelio Show, their new docuseries on Hulu. The normal D’Amelio stomping grounds are Los Angeles, where they reside in an aggressively modern mansion after decamping from the East Coast in the wake of the daughters’ exponential rise. In New York, in a rustic conference room overlooking Central Park and 6th Avenue, each family member is dressed in a coordinating color palette: Charli in a black mock-neck shirt with matching skirt, Dixie in patterned black and white, mom Heidi in a sleek onyx dress, and dad Marc in a grey suit. They’re polite but occupied, Dixie picking at her neon acrylics while Charli chats up the PR team who lounge about tapping on laptops and sipping from insulated water bottles. 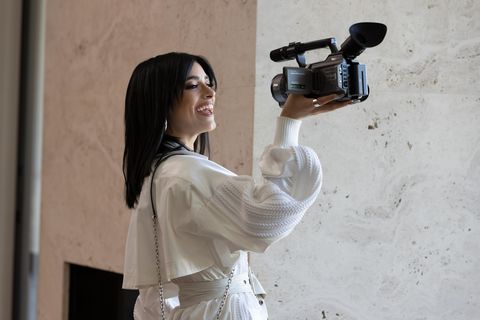 Why do a docuseries? Not to create a Keeping Up With the Kardashians competitor, that’s for sure. The D’Amelios say the series was, instead, an attempt to break out of the box they’ve been forced into. Charli tells me, “It’s important that we show the inside of our lives and what it’s really like, not us smiling in front of the camera and acting like everything’s perfect all the time. That’s not reality, but that’s what people want to see from us. That’s not real. I feel like once we found the crew that would be ready to portray the truth that’s what made it so interesting.”

The truth has been a tricky concept ever since Charli shot to TikTok stardom in 2019, her innocent dance videos suddenly raking in millions of views (and criticism, both legitimate and not.) “This happened as an accident, and now I just have to be okay with everyone saying anything,” Charli explains in the eight-episode show. Dixie joined the roar soon after, as did their parents, but neither sibling initially sought the adoration—or the heat—they juggle now. TikTok was always supposed to be fun.

What The D’Amelio Show documents is just how little fun it’s turned out to be. There are times when watching the series feels like watching a breakdown in slow motion. It’s jarring to see the girls cycle through extremes: In one episode, Charli’s collapsing into tears after a commenter implies she should commit suicide, and in the next she’s enjoying a private backyard hibachi dinner with her ex-boyfriend Chase Hudson in attendance, dressed as a haute Willy Wonka and sporting a cane. Dixie enjoys the skyscraping views of her LA apartment and bougie beachside dates with her beau, Noah Beck, just as frequently as she struggles through multiple bouts of alarming depression. These women are young, impossibly so, and yet equipped with a burden and responsibility they’re always supposed to register as blessing. 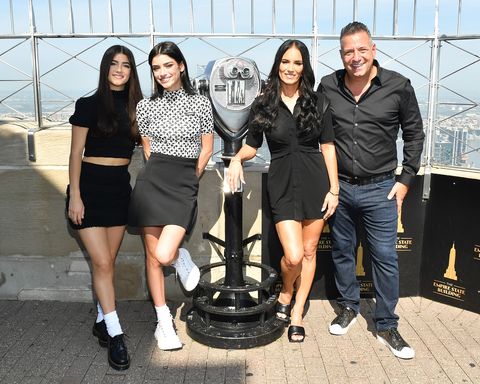 “I just feel like it gets more difficult every day,” Charli says in one of the later episodes. “I am responsible for everyone around me. Every person who works for my family (D’Amelio Family Enterprises) puts pressure on me. If I wanted to quit, well, now they don’t have a job.” This level of honesty is when The D’Amelio Show is at its best; when it veers from cutesy graphics and sound effects, it can be downright cutting.

In person, Charli is much more practiced with her responses, soft-spoken but measured. She does not self-identify as a celebrity, despite her following. “I feel like we have a lot of times where we’re just sitting at home doing nothing,” she tells me. “So it’s different than how you would think of a celebrity. But I think it’s somewhat of a confidence thing. People telling you constantly, ‘You’re not a celebrity. You don’t deserve this. You don’t deserve that.’ So we also convinced ourselves like, ‘Oh yeah, we don’t deserve any of this.’”

It’s perhaps easy to scoff at the sisters, who can certainly come across petty, shallow, or insensitive, but it’s equally easy to forget that neither is even 21 yet, forced into the limelight as they’re only just discovering their personalities and boundaries. They are now required to spin something substantial from the attention thrust upon them, despite having little clue what “substance” entails. What do we, as a society, do with the D’Amelios? The better question—and one that The D’Amelio Show tries to probe—is, what do the D’Amelios do with themselves?

The D’Amelio Show can’t answer that inquiry because the D’Amelios are on step one of the journey, trying to keep their boat adrift while mapping out where they want to sail. When asked if they feel they’ve made something “meaningful” with the series, which repeatedly emphasizes the importance of mental health, the girls both nod, but remain ready to defend against “haters” saying it’s not enough. Says Dixie, “We’ve done little things here and there, but I definitely have not done everything I want to do with really talking about mental health.”

Then there’s the burden of parenting a child living the warp-speed cliche of internet fame. “I constantly check with everybody and myself: ‘Are we happier today than we were before we started this?’” Marc tells me. “And right now I think we are. Overall it has ups and downs, but we realize how lucky we are, how blessed we are, and what an incredible ride this is. I want them to enjoy it.” 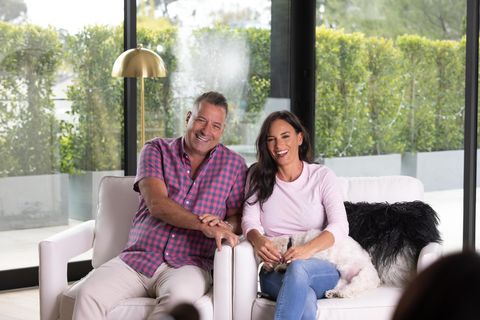 There’s a repeated emphasis throughout our conversation—and throughout The D’Amelio Show—on how “lucky” the D’Amelios are, and it’s true: They have seemingly infinite resources. They have Valentino sending Dixie samples and Nickelodeon slathering Charli with slime. They have a clothing line with Hollister. Dixie’s singles seem poised to offer her a real singing career. J.Lo wrote Charli a tribute for the Time100 Next 2021 List (“I dance on the internet. I shouldn’t be on that list,” Charli says.) But there are real consequences to this life on top: In one particularly crushing scene in the Hulu series, Charli realizes she no longer loves to dance the way she once did; it has become another form of commodifying her identity.

“We never told anyone that we were perfect,” Charli tells me.

The D’Amelio Show is straightforward, occasionally funny, rarely exciting, and not altogether successful in its “slice of life” approach. It severely lacks in Kardashian-esque staged family drama, but it accomplishes one thing KUWTK arguably never has: forcing the audience to see the reality behind social media-fueled fame. Perhaps the most insightful nugget The D’Amelio Show has to offer comes not from a D’Amelio but from one of their friends, fellow TikToker Quen Blackwell. She tells Charli: “Social media is an outlet for people who don’t know how to navigate life in the real world, so they escape to the internet, and now that the internet is such a huge part of life there’s no real escape.” The D’Amelios have realized this truth: Escaping the screen—and the box it puts them in—is almost impossible. Now, they’re fighting like hell to make their new reality worth it. “The endgame is to be happy,” Charli says. “That’s really it.”

Tom Holland Paid Tribute to Zendaya on His Instagram Like a True Supportive Boyfriend
The 33 Best-Reviewed Workout Clothes on Amazon
Free the Nippleless! From Ourselves and the Shame of Living in a Society That Rarely Acknowledges Us
Tia Adeola Is Ready To Travel Again
Kylie Jenner Gave an Intimate Look at Her Changing Body During Her Second Pregnancy