On Christmas day, Kylie Jenner showed off the newest addition to her family, a brand new kitten discovering her home. The ginger cat was revealed on Jenner’s Instagram stories, first showing him or her walking toward Jenner’s camera with the bright sunshine lighting up its adorable paws and tail. The kitten will be joining a house full of dogs, including Norman, Bambi, Rosy, Harley and Kevin. 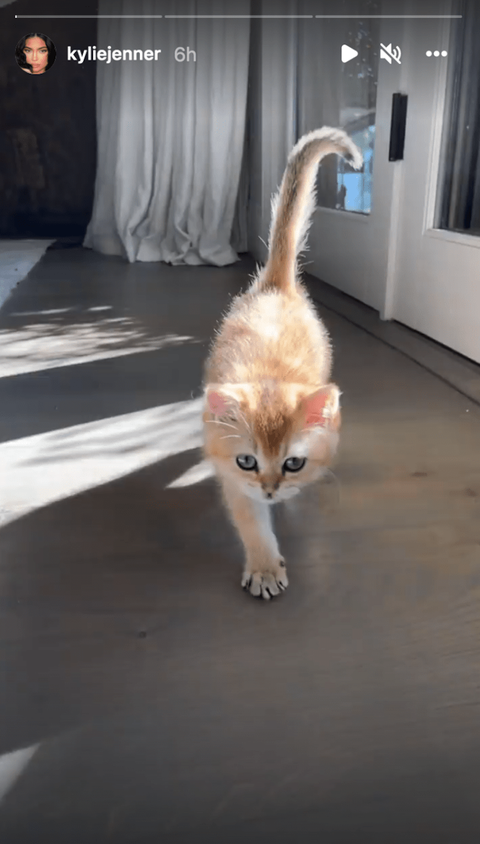 Later, the Kylie Cosmetics founder showed the kitten again, this time making biscuits on her baby bump in a boomerang.

Jenner was apparently watching the Boston Celtics play a basketball game with Stormi at her side in matching as holiday pajamas in a festive gnome print, the same print Kendall Jenner also showed off in her Instagram Stories this weekend.

Jenner recently confirmed she is expecting a second child with her partner Travis Scott, with a February due date. Her pregnancy has her laying low at home, according to an insider who spoke with US Weekly earlier this month.

“Kylie and Travis have been laying low at home together, getting final preparations together for the arrival of their baby,” they said. “Travis has been very supportive the entirety of the pregnancy, but now he’s spending even more time with Kylie as a family.”

Jenner is “really enjoying this time with her family right now,” said the source, who added that “Kylie truly loves nothing more than being at home, running her business and hanging out with Stormi.”

There have not been many updates about Jenner’s life online since the tragedy at Astroworld in November, where Travis Scott was headlining the musical event that ended in ten deaths.

“Travis and I are broken and devastated,” Jenner wrote in a statement after the event. “My thoughts and prayers are with all who lost their lives, were injured or affected in any way [sic] by yesterday’s events. And also for Travis, who I know cares deeply for his fans and the Houston community. … I am sending my deepest condolences to all the families during this difficult time and will be praying for the healing of everyone who has been impacted.”