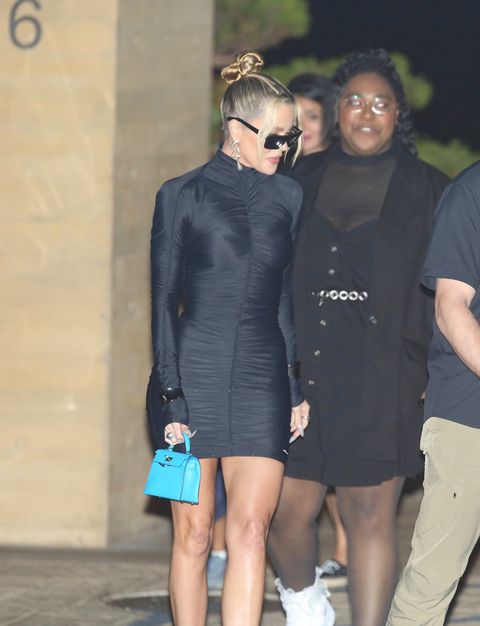 Late night, new mom of two Khloé Kardashian was photographed out for the first time since news broke on Friday that her baby boy was born via surrogate. Kardashian was dressed stylishly for dinner at Nobu, pairing a black bodycon dress with a blue micro bag, perhaps a nod to her new son. Kardashian is raising the baby on her own, following her ex-boyfriend and baby’s father Tristan Thompson’s secret baby scandal. Thompson and Kardashian also share four-year-old daughter True.

A source told Entertainment Tonight in mid-July, “The two aren’t together, and Khloé will have the baby full time. Khloé wants Tristan in both the kids’ lives as much as he wants to be.”

Kardashian has not shared a name for her son publicly. A source told People that’s because she hasn’t finalized one. “Khloé hasn’t shared a name yet,” the source said. “She is taking her time with the name. She wants it to be just right.”

She is still elated as a new parent though: “Khloé is on cloud nine,” the source said. “Getting a sibling for True has been such a journey. She is very excited to be a mom again. She really wanted a baby boy.”

A source reiterated that point to Entertainment Tonight: “Khloe is so grateful to have been able to expand her family and is adjusting to being a mom of two,” the source said. “[She] has been with the baby for a little while now.”

In the Merciless <i>Blonde</i>, How Much of This Marilyn Monroe Is Real?
The Inventor of Olaplex Just Launched His Own Brand
Four Ways to Get Creative With Curls and Coils This Fall
Selena Gomez Is Obsessed With These UGG Boots and They’re 62% Off on Amazon Now
Loewe Embraces the Real and the Fake