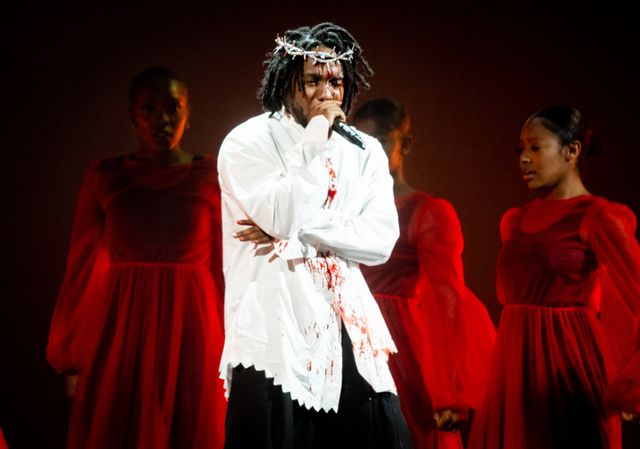 Making his debut at the Glastonbury Festival in Somerset, England as Sunday’s headlining act, rapper Kendrick Lamar gave an astonishing performance, supported by an impressive troupe of dancers and notable accessories⁠—mainly, the Tiffany & Co.-designed titanium crown of thorns that adorned his head.

After delivering his set, Lamar dedicated his powerful finale to women’s rights, following the shocking Supreme Court decision to repeal Roe v. Wade, which had guaranteed access to early stage abortions across the country.

Huddled at the front of the stage, framed by dancers in black, white, and red, for his concluding song “Savior,” Lamar, with fake blood running down his face, pouring from the 8,000 diamond-encrusted crown of thorns, chanted the line: “They judge you, they judge Christ, Godspeed for women’s rights,” over and over again.

He wasn’t the only Glastonbury act to put out a message for all the women feeling shocked and upset by the SCOTUS decision.

Ahead of Lamar’s headlining set, Lorde yelled “Fuck the Supreme Court!” during her performance; for her part, Olivia Rodrigo brought British singer Lily Allen on stage to sing “F*** You”, dedicating the song to the Supreme Court.

50 Iconic Outfits From ‘Keeping Up With the Kardashians’ You Haven’t Looked at in Years
8 Comfy-Chic Travel Outfit Ideas, According to Beyoncé’s Stylist
Issey Miyake Brought the Avant-Garde Down to Earth
50 Insanely Glamorous Photos of Marilyn Monroe
Jaguar’s Future Is Driving Towards Style and Self-Expression