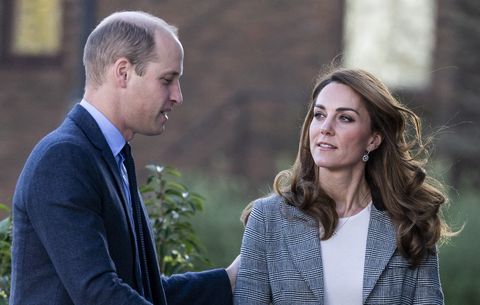 The Duke and Duchess of Cambridge tend not to show any public displays of affection while on the duty. But today they had a little moment while arriving at Shout’s Crisis Volunteer celebration event at Troubadour White City Theatre. William was seen rubbing Kate’s back when greeting people. It was quick but sweet (and not against royal protocol; couples can do whatever they feel is appropriate for the event):

Kate was fully embracing fall fashion at the event, pairing a Smythe jacket with a white top, burgundy pants by Joseph, and black heels. She accessorized more subtly with dangle earrings and a matching necklace:

This is Kate and William’s first event this week, but it’s not Kate’s only. The Duchess will be out again on Friday, visiting East Anglia’s Children’s Hospices’ new location “The Nook” on Friday. There, she’ll “meet children and families being supported by EACH, tour the hospice, and officially open the building,” Kensington Palace tweeted.

William and Kate will be out again next week, with two dressy evening events on the calendar. The Duke and Duchess of Cambridge are attending the Royal Variety Performance at the Palladium Theatre next Monday, November 18, where they will be in red carpet-ready attire.

Their second formal event will be that Thursday, November 21. The two will be at the Tusk Awards, Kensington Palace announced.

William and Kate’s appearance today comes shortly after Us Weekly reported about the state of his relationship with his brother Prince Harry. A source said things between the brothers weren’t great right now: “They both need to put in the effort to rebuild their relationship,” the source said.

Hood By Air Officially Makes Its Return
The 21 Fashion Brands With The Best Instagram Grids
A Complete Timeline of Taylor Swift and Katy Perry’s Friendship and Feud
<i>Hamilton</i>: The True Story of Angelica Schuyler
Will Smith Seems to Address Jada Pinkett Smith’s Affair With August Alsina in Resurfaced Video