Jessie Reyez would rather not have a conventional conversation. “It’s difficult when you have three, four, or five different voices in your head trying to get out,” says the 28-year-old singer-songwriter, who makes a cameo 19 minutes into Beyoncé’s Black Is King visual album, a project Reyez is “amped” and “grateful” to be a part of. “With a song, I’m free to have a conversation with me and the five other me’s, and I can actually get some clarity.”

This insight helps explain the contemplative pauses that punctuate Reyez’s speech, but her thoughts are always worth the wait. Profound and often poetic, they are the expressions of an artist who processes the world through song.

“I remember a lot of cumbia and salsa—a lot of Grupo Niche and Alquimia,” Reyez says, describing the music that filled her childhood home in Toronto, where her parents landed after emigrating from Colombia. According to family lore, at the age of three, Reyez was caught singing along to a TV performance by legendary tenor Luciano Pavarotti, prompting her mom to enroll her in piano lessons and her dad to teach her to play the guitar.

Reyez’s parents also instilled in her a strong work ethic that saw her through years of busking and passing out demos while working odd jobs. “When I was a cashier at Sobeys [a Canadian grocery chain], I would write songs on receipts,” she says. “I still have my name tags from those days.” 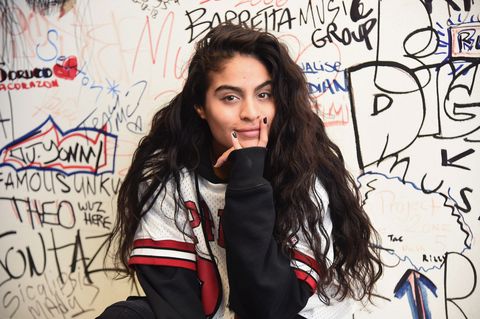 After a stint at Toronto’s The Remix Project, a nonprofit arts incubator for underserved youth, Reyez released an achingly raw breakup song called “Figures” in 2016, which served as a showcase for her raspy R&B vocals and garnered comparisons to her idol Amy Winehouse.

The momentum continued to build with the release of her 2017 EP, Kiddo, whose powerful single “Gatekeeper” delivered an unflinching personal account of sexual harassment in the music industry. Her 2018 EP, Being Human in Public, was nominated for a Grammy.

And then in late March, in the midst of the global COVID-19 crisis, Reyez released her debut full-length album, Before Love Came to Kill Us, which was recently shortlisted for Canada’s Polaris Music Prize.

“Mortality’s been an innate part of my upbringing,” she says of the album’s themes of love, death, loyalty, and loss. “My mom always anchors every sentence with ‘If God allows’ to recognize that when man makes plans, God laughs. I wanted to trigger people to think about their mortality, because if you think about it, then maybe today you’d be more authentically yourself.”

Album standouts include “Kill Us,” featuring pithy lines like, “No one gets out of love alive”; “Love in the Dark,” an intimate track that will leave you feeling, as Reyez describes it, “this weird sensation of wanting to hug yourself ”; “Coffin,” a collaboration with Eminem, who’s also featured her in his own recordings (“We just kind of vibed; I clicked with him,” she says); and “Intruders,” a song about indigenous women fending off colonizers. “Colonialism is the mitochondria of racism,” Reyez said upon the song’s video release in June.

Another artist she’s clicked with—in addition to Drake, a fan and fellow Canadian who dubbed Reyez “a national treasure”—is Billie Eilish. “Maybe the reason we get along is because she’s honest as fuck, and I try to be, too,” Reyez says of the “Bad Guy” singer.

Eilish invited her to open her Where Do We Go? World Tour, which was postponed in response to CDC guidelines around large gatherings. Reyez’s solo tour in support of Before Love was slated to follow Eilish’s world tour, but is being rescheduled. She was also scheduled to perform at Coachella, which was moved to October, then canceled.

It was not lost on Reyez that the very release of her album—with its eerily relevant themes— might have needed to be put on hold, too. “To be honest, I thought about postponing it. I didn’t want to be insensitive. I was conflicted,” she says. But her fans let her know that they needed her music now more than ever. “I put up an Instagram poll, and, like, 97 percent of people said, ‘Put it out, because art is life.’ And that resonated with me.” In this strange time, Reyez is just taking everything as it comes. Because, as her mom taught her, when man makes plans, God laughs.

Lisa Mischianti
Lisa Mischianti is a New York-based writer and editor who covers topics including culture, fashion, entertainment, and music.

‘We’ve Grown Up Together’: Watch the <i>Girlfriends</i> Cast Reunion as the Sitcom Comes to Netflix
Watch Jessica Alba And Daughter Haven Crush A New TikTok Dance Routine
Blake Lively and Ryan Reynolds Roasted Each Other on Instagram
Stella McCartney Is Realistic But Hopeful
Geraldine Viswanathan Is Living Her Dream in <i>The Broken Hearts Gallery</i>