One of the freakiest sequences in the premiere episode of HBO’s The Last of Us takes place not when the hordes of mindless infected attack, but when an epidemiologist is asked for his thoughts on pandemics. During a flashback to 1968 in the episode’s opening scene, this epidemiologist—a man named Dr. Neuman—appears calm during a live talk show, in which he shrugs off any long-term concern over viruses. In his apparently esteemed opinion, viruses have always and will always attack and kill humans, but humans have the tools to fight them off. Individuals will die. Humanity will prevail.

But fungi, he posits, are a different story. “Fungi seem harmless enough,” he tells the audience. “Many species know otherwise. Because there are some fungi who seek not to kill but to control.”

His fellow scientist scoffs; these types of fungi are not studied contorting humans but, rather, ants. Dr. Neuman acquiesces. “True, fungi cannot survive if its host’s internal temperature is over 94 degrees,” he says. “And currently, there are no reasons for fungi to evolve to be able to withstand higher temperatures. But what if that were to change? What if, for instance, the world were to get slightly warmer?”

At this point, the alarm bells should be ringing for just about anyone watching at home. The Earth is warming, and not just slightly. As Dr. Neuman continues, his words become only more ominous. The fungus he cites has no goal other than to spread, by any means necessary, ravaging “billions of puppets with poisoned minds.” Then he adds the real kicker: “And there are no treatments for this, no preventatives, no cures. They don’t exist. It’s not even possible to make them.”

Even the most unflappable viewer might be hard-pressed to watch this without muttering an audible, “Uhh…?” And dear reader, your concern is valid. The Last of Us, based on the 2013 PlayStation game of the same name, endeavors to feel as real as possible, even when its monsters look more like alien abominations than the mushrooms most of us are familiar with. This is intentional, an intelligent tactic to straddle the fictional and the factual. But how much real-world worry is too much? We’re still battling through one pandemic; do we really need to start fretting over another? One with no vaccine? Is this simply Last of Us fear-mongering, or do we need to start giving portobellos the side-eye?

The answer is yes and no. And that’s the brilliance of the HBO adaptation, which takes the video game’s already well-grounded horror and fills in the shadows just enough to invest us, addict us, and terrify us. Ahead, let’s discuss what’s really worth getting frightened over. 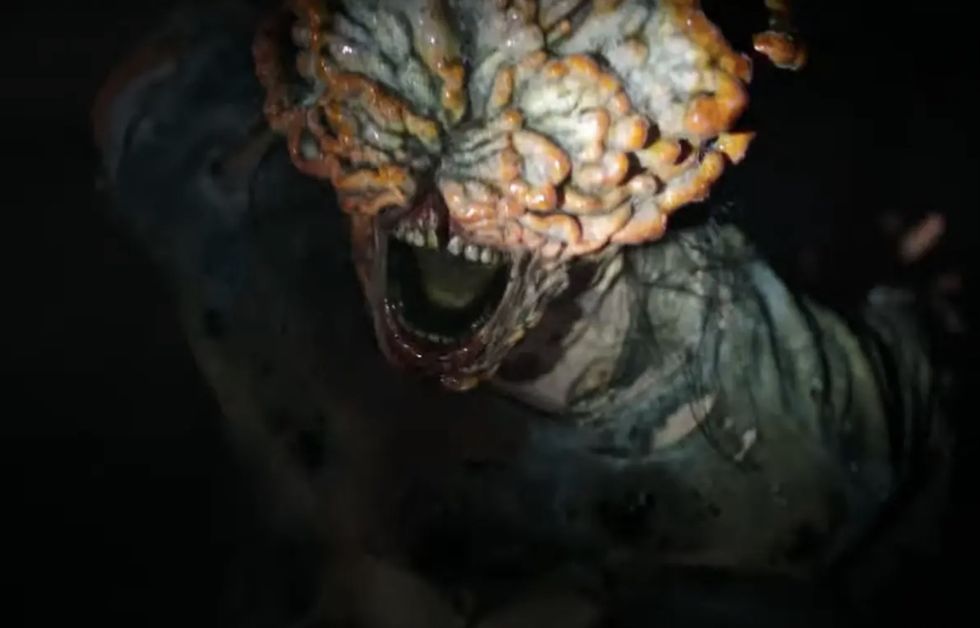 One of the infected in The Last of Us.

Yes. In fact, there are numerous types of cordyceps fungi, though Ophiocordyceps unilateralis is the one from which The Last of Us derives its narrative. Game writer (and co-creator of the HBO show) Neil Druckmann first encountered the fungus in a 2008 Planet Earth clip, which depicted an ant slowly consumed—and controlled—by insatiable blooms that rain spores onto the ant’s colony. Druckmann inserted a version of this fungus into The Last of Us, which switched the victims from insects to humans via infected crops.

How does this zombie fungus work in real life?

As science writer Ed Yong laid out in dire detail for a 2017 story in The Atlantic, the fungus plays a dirty game: When it infects an ant, it kills neurons and hijacks the insect’s control panel—without actually piercing the brain. As it strips the bug’s body of nutrients, Ophiocordyceps unilateralis moves the ant to an elevated plant stem, one where the temperature and humidity conditions are ideal for fungi to flourish. There, it freezes the ant in place by paralyzing its jaws around the stem, allowing the fungus time to spread through the body, burst through the head, and develop spores, which can then float from above down onto the rest of the ant’s colony as they trudge by. And so the infection spreads.

Yong describes this effect in chilling prose, citing that Pennsylvania State University entomologist and food security professor David Hughes believes “[the fungus] effectively cuts the ant’s limbs off from its brain and inserts itself in place, releasing chemicals that force the muscles there to contract. If this is right, then the ant ends its life as a prisoner in its own body. Its brain is still in the driver’s seat, but the fungus has the wheel.”

You can understand why such a real-world effect would make for a delicious zombie story.

Could climate change really create infected fungus zombies like the ones in The Last of Us? Can cordyceps infect humans? In short: Should I be worried?

Evolution of fungi in response to climate change is far from an unreasonable concern. Dr. Ilan Schwartz, a Duke University School of Medicine infectious diseases specialist, put it this way to Vulture: “It’s not outlandish, the argument that global warming has increased the thermal tolerance of a fungi. It hasn’t been proven. It’s a hypothesis, and it’s happening on a fairly slow scale. But it is possible.”

That said, cordyceps cannot currently invade humans, and some experts believe the fungus is unlikely to make that move any time soon, if ever. In an interview with Forbes, João Araújo, a New York Botanical Garden assistant curator of mycology and an expert in insect-associated fungi, told Forbes it’s “very unlikely” cordyceps could take over human bodies in the same manner as insects. Hughes, in his own Forbes interview, echoed these thoughts, adding that cordyceps infecting humans is “not that fanciful” but that cordyceps controlling humans, as witnessed in The Last of Us, isn’t likely something to worry about.

In a separate Fandom.com interview from 2019, Hughes—who consulted on the original The Last of Us game—explained that fungi are indeed a danger to humans, citing that 1.3 million people die every year due to fungal diseases. But Ophiocordyceps “jumping from ants to humans and then onward [to other people]…that probably requires too many [improbable] circumstances to happen.”

Charissa de Bekker, an Ophiocodyceps expert and mycologist, summarized why to Vox: Cordyceps isn’t a jack of all trades. Just because the fungus has evolved over millions of years to infect specific insects doesn’t mean it’d be able to do the same with humans. “We don’t see the fungi specialists just jumping from one ant species to another, let alone from an ant species to another insect,” Bekker says. “Spreading from ant to human is just such a big jump.”

The Last of Us director Craig Mazin isn’t too concerned about the fungus either. “It’s real—it’s real to the extent that everything [Dr. Neuman] says that fungus do, they do,” Mazin told The Hollywood Reporter in January. “And they currently do it and have been doing it forever. There are some remarkable documentaries that you can watch that are quite terrifying. Now his warning—what if they evolve and get into us?—from a purely scientific point of view, would they do exactly to us what they do to ants? I don’t think so. I doubt it.”

Final verdict: Cordyceps as a serious threat to humans—and their bodily autonomy—isn’t outright impossible, but it is improbable. Still, those monsters on your screen are yet another good reminder of climate action’s importance. 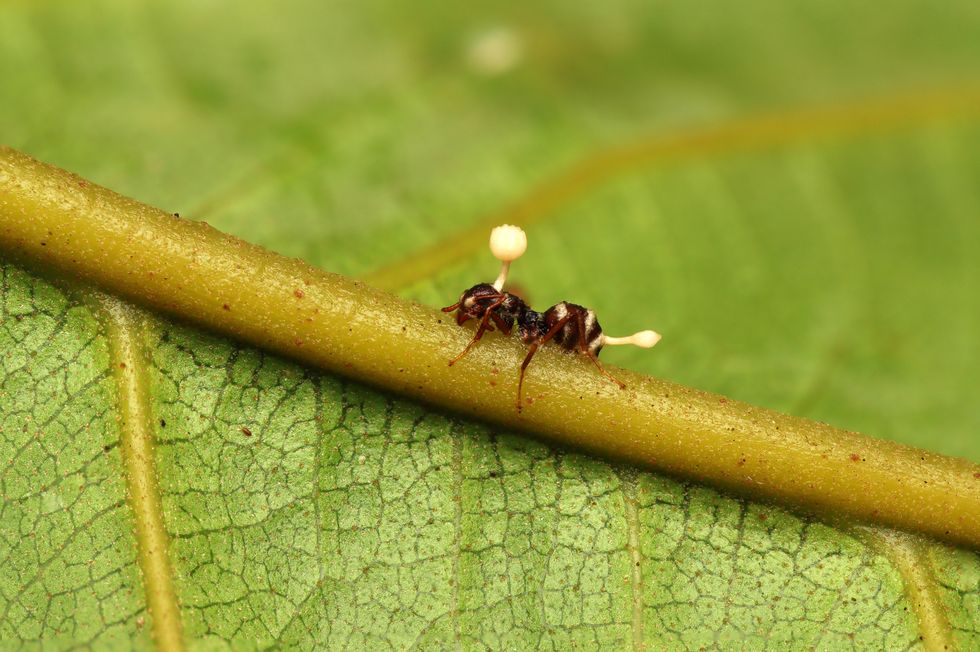 An ant infected with cordyceps fungi.

In theory, is Dr. Neuman correct? There would be no cure for an outbreak like the one in The Last of Us?

Here, we’re getting into tricky speculative territory—but it’s also part of what makes The Last of Us adaptation so rich. The entire plot hinges on a young girl named Ellie, who’s supposedly immune to the effects of cordyceps in spite of her recent infection. After sustaining a zombie bite—which should have “turned” her within a matter of hours—she retains her humanity and sprouts no stalks. As such, she might be the long-awaited miracle vaccine developers need to create a cure.

So why, then, did the show creators include Dr. Neuman’s warning at the beginning of the series? Are there really, as he says, “no treatments for this”? And if we already know Ellie’s mission is in vain, why invest in it at all?

For one thing, Dr. Neuman could be wrong. An outbreak like this has, blessedly, never happened in humans, and there is evidence of other species “domesticating” cordyceps, employing it as a biological friend rather than a foe.

But he could also be right. As Dr. Schwartz told Vulture, fungi are more closely related to humans than they are bacteria that cause infections; in other words, their “cell machinery is the same as ours.” That makes antifungals much more difficult to develop than antibacterials, as antifungals need to target fungal cells without also hurting human cells. This could be the issue Dr. Neuman is citing during the talk show.

We’ll need to see more episodes to fully understand where The Last of Us lore and science diverge, and what specific worries Dr. Neuman implied in his speech. But the inclusion of this dialogue sets up the entire thesis of the show (and the game). This is the moral question: What do you fight for when the result isn’t guaranteed? What is worth more, the cure or the girl? And if the answer isn’t clear, who gets to decide? With Dr. Neuman’s words, the series forces viewers to think through a terrifying prospect: not that of losing control, but of having it. What happens if you’re confronted with the possibility that your efforts are futile, that you will lose, and you must endure anyway? In that environment, what kind of person would you become?

Lauren Puckett-Pope is an associate editor at ELLE, where she covers film, TV, books and fashion.

Naomi Watts Wants Everyone to Talk About Menopause
Charlotte Tilbury Wants More Pillow Talk With You
The 50 Most Gorgeous Celebrity Mansions
Vanessa Hudgens and Cole Tucker Are Reportedly Engaged
Are You Ready to Free the Nipple This Spring?