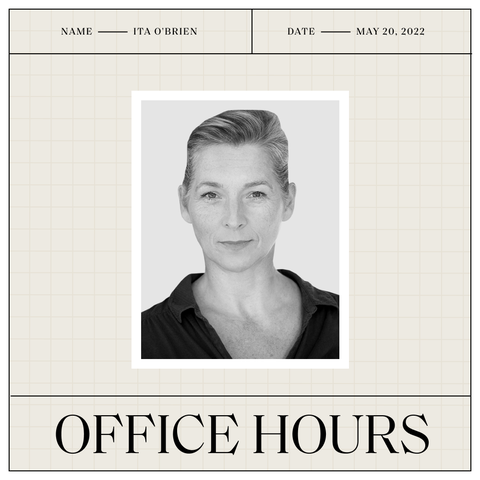 In ELLE.com’s monthly series Office Hours, we ask people in powerful positions to take us through their first jobs, worst jobs, and everything in between. This month, we spoke with Ita O’Brien, a pioneering intimacy coordinator who’s brought her expertise to groundbreaking shows like Sex Education, Normal People, I May Destroy You, Gentleman Jack, and, most recently, Conversations with Friends, out now on Hulu. O’Brien, a trained dancer and actor who received her Master of Arts in movement studies, was one of the first in the U.K. to develop guidelines for intimate scenes, creating best practices for working with any kind of nudity and sexual content. In her role now, she helps to carefully choreograph scenes on set, ensuring all actors feel safe and comfortable, while also serving the vision of the project’s director and writers. “There’s a brilliant system in place for it,” Alison Oliver, who plays Frances on Conversations with Friends, told ELLE about working with O’Brien. “We’ll discuss the scene: What’s the trajectory, and what’s the quality of intimacy? And why is it happening? It’s a continuation of dialogue, in a sense.” Below, O’Brien discusses what it was like shooting the highly-anticipated show, how she first came into this line of work, and the way she copes with the psychological toll that comes with the profession.

My first job ever

When I was a teenager, I worked with a pharmacist, reordering the drugs as they ran out. At the end of the day, I’d have to stack all the prescriptions and put them in order. That was a really lovely job. I liked the methodical processes that allowed it all to run smoothly—the sense of helping people.

My worst job ever

In my dancing days, when I was out of work and in my early twenties, I took a job in retail selling clothes. That was not good for me—particularly the days that were freezing cold and you’re sent down into the cellar to do stocktaking. I didn’t last very long.

How I first created intimacy guidelines

I was doing a devised piece of work where I was asking performers to explore the dynamics of a perpetrator and a victim. I was thinking, How am I going to put in place a really good rehearsal process to support my actors so they can explore this? That was the focus. Then I was speaking to one of my colleagues, who was the head of movement at one of the big drama schools, and she said, “Please come and teach what you’re developing.” So I did that, and then over the course of a few years, the students were saying, “This is great here. Can we expect this in the industry?” So I started speaking to Equity [the union for British actors] and shared the work with a group of agents at the Personal Managers’ Association in June 2017. That’s the first time I started pulling it together into guidelines. Then, in October 2017, [Harvey] Weinstein happened and the Time’s Up movement and the #MeToo movement, and the industry was saying, “We have to do better.” I was there to say, “Here is a process to work with intimate content in a professional way that allows everybody to work with respect.”

Why having an intimacy coordinator is essential

What it feels like to see this work become more common

I have to pinch myself. It’s mind-boggling, but also I’m so grateful, and it’s so rewarding. The amount of times people ask, “How come it’s taken so long for this role to be there?” It’s so lovely putting the process in place and working with actors who perhaps are really nervous, but then having them say, “We’ve had a really great day. I know I’ve done something really good, and I feel really proud.” Then the work comes out, and you see the impact it has on the public at large. Particularly things like Gentleman Jack, where the queer female community said, “Thank you. This represents us back to ourselves.” Or the queer male Black community saying thank you for I May Destroy You. In those moments, you just go, wow. And that comes from a proper process, allowing proper research to be done, allowing the writing to be honored. That’s the impact it can have. It’s really humbling.

The work process on Conversations with Friends

First, it’s talking to Lenny [Abrahamson], the director, hearing his ideas and what he wants, having that roundtable discussion and talking about characters, what this moment’s saying, reading the script, talking about the beats of a scene. I’m just being present and facilitating and listening, not just to what people say, but how they’re responding in their bodies. Trying to honor and serve everybody’s inspiration and their impulses, so that everybody feels they’re really telling the right story for this scene in this moment for these characters. So for example, [Frances and Nick’s] initial encounters are from a real desire, but they’re still holding back a little bit. All those things are part of the conversation.

The difficulties of being in film and television

There have been times that it’s been challenging, because while the industry has said, “We have to do better, we want to change,” some individual people like the status quo and like how it worked before. Some people also didn’t understand that the role of the intimacy coordinator isn’t to take over or to impose, but to serve. We serve the director’s vision, the writing, the actors, the crew.

How I practice self-care in my career

As soon as you invite the possibility of intimate and sexual content, it comes with people’s concerns, and there’s a sense in the room of what their experiences might have been like in the past. Normally, when I ask anybody about their experience working with intimate content, everybody has stories of feeling awkward to feeling harassed to something that was, sadly, abusive. That’s in the room, that energy is there, and that’s part of what you’re taking care of as an intimacy coordinator. So because of that emotional and psychological toll, I have a support person who I go to when there’s been a tricky day on set or something to unpack. I go to that person, and they’ve been a bedrock. I really do feel like that practice has helped me to develop this role by reflecting and resetting. It’s helped me have that awareness of how to both support myself and support the process.

This interview has been edited and condensed for clarity.