Given the absolute hellscape we’re currently living in, the idea of leaving planet Earth altogether and starting a new life in outer space doesn’t sound unappealing. But Netflix’s new limited series Away takes place in the Before Times, a more innocent era when coronavirus hadn’t uprooted life as we know it, so this is not an easy decision for Hilary Swank’s Emma Green to make.

Emma is a NASA commander at the top of her game, who’s been training for years for this three-year mission to Mars. She’s also a wife and mother, and her commitment to her mission is tested in the show’s very first episode when her husband (Josh Charles) suffers a sudden heart attack. Faced with an agonizing choice—abandon the mission her entire career has been building towards, or abandon her ailing husband and teenage daughter in the middle of a crisis—Emma makes the difficult decision to put her work first. It’s the kind of tough call we’ve seen scores of male heroes make in cinema over the years, but feels quietly revolutionary coming from a woman.

Swank speaks to ELLE.com about the refreshing gender dynamics of Away, her disappointment in this year’s Oscar nominations, and how this space saga mirrors the loneliness of lockdown.

We’ve all seen a lot of space movies where the man goes off on his mission while the wife stays behind and worries. But it’s very rare to see that gender dynamic flipped, as we do with yours and Josh Charles’s characters.

Yeah, and he’s supportive. It’s not like he’s jealous or acting out. He wants her to succeed because it’s a success for him too, because they’re partners. It’s rare, I think, to see such a beautiful love story where the drama doesn’t revolve around their relationship issues. The issues are solved by them working together, shoulder to shoulder. I think in the end, the show is a love story about how love can support you to follow your dream, to not inhibit you from living your fullest purpose. Which is very rare for women to experience, I think. You shouldn’t have to compromise your dream for love, and you shouldn’t have to compromise love for your dream.

Emma choosing to still go ahead with the mission, even after her husband has a heart attack and her daughter begs her not to go, was shocking to me. And I’m not sure I would’ve felt that way if she were a male character.

Yeah. You would have been like, of course he has to go. It’s his job. Because it’s just what we’re taught from the youngest age, that this is what a woman’s place is, and this is what a man’s place is. And even this deep-seated thing in women, this apologizing all the time. It’s so deep, you know? When women succeed they say, “Oh I’m sorry.” It’s like they want to make themselves little, in order to make other people feel better. And that’s not our job.

Is that something you felt you had to unlearn?

I wouldn’t say unlearn it, but I’m constantly reminding myself to apologize when appropriate. And to not apologize for living my greatest life, or for my success, or for how what I’m doing makes other people feel. I don’t oppress people. I lift people up. I encourage people to live their own personal mission statement and to make a choice every day to work towards making that happen. And I don’t want to apologize for myself. I’m an avid tennis player, and when you have an overhead that you just smash, inevitably 99 percent of women are like, “Oh, sorry,” because it got close to hitting someone. Meanwhile, men are like, “Move! Do you want to get hit? Move!” Or they’ll apologize to the women, but not to the men. And I’m like, no. Don’t apologize. Play as hard as you can. 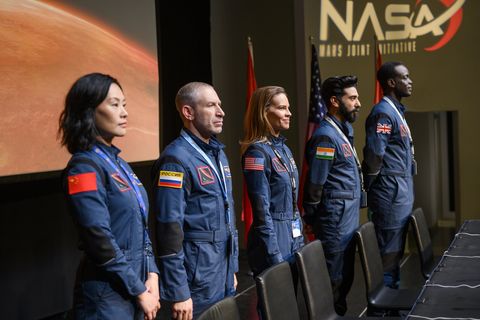 The show does seem conscious of internalized misogyny, too. It was striking to me that Emma’s only female co-worker on the ship, Lu (Vivian Wu) is the one who calls her hysterical at one point.

Yeah, there were so many points like that. We’re in a time right now where things are getting, I think, better for women. We’re in this time where we’re trying to find equality and we take a step forward and we certainly take steps back. Like, the Oscar nominations this year. In how many of the best film nominations was there a female lead? One. And there’s 10 slots? It’s embarrassing. I’m appalled. This year’s [nominations] are being shaped by a white man’s vision of the world and it’s just so unfair.

And so this show, I wake up every day so grateful that I get to go challenge myself as an artist. You know, episode 7 was so challenging for me that I was not able to sleep very well. I was waking up going, “Oh my God, don’t mess this up.” And in a career that spans 29 years, do you know how rare it is to find that? I’m certainly not finding it in film. Independent film had this beautiful place in the world and now there’s so much content that you make a small movie and it probably will never see the light of day, because these distributors pick it up and then just latch onto the one that gets the most talk. And they drop the rest.

Do you feel a certain sense of responsibility, given that you’ve been in this industry so long and you have two Academy Awards, to lift up certain stories?

Oh yeah. But I’ve always felt that, even before I had Academy awards and before I was an executive producer on anything. I felt a responsibility to tell stories that I felt represented not only how I see the world, but how the world actually is. There’s diversity in the world, and our job as storytellers is to find those stories and tell them so that we represent everybody. Coming from the background that I come from, which is a lower socioeconomic background, and being a woman—while also, yes, white and privileged in certain ways—I feel a responsible to tell stories that reflect everybody. 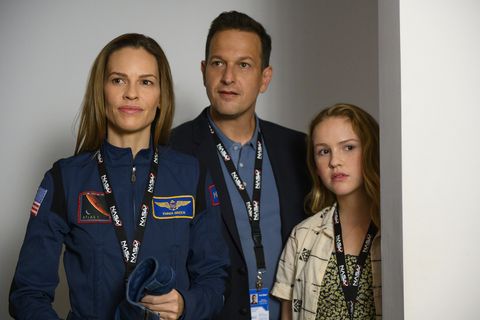 How has lockdown been treating you?

We wrapped in late February, so I guess if there is such a thing as good timing with this, it was good timing. We wrapped before all the sets shut down. Away was a six month shoot, which is quite long, and usually when I finish a job I take time to recharge, and go off into nature and just rest. So I came to the realization that my husband and I are sort of self-isolators just by nature. But it’s heavy. You’re just heartbroken for the world.

Away deals a lot with isolation and being separated from your family. Does the show resonate differently with you at all in this era?

In the show, we’re all leaving our loved ones behind down on earth as we go on this journey, and creating this family within the confines of this ship. There are times when the isolation of that can be quite overwhelming and claustrophobic for these characters. Thinking about how it relates to now, it’s the desire to have the simple things that we take for granted. Longing to have your family’s arms around you, and not being able to. Only having the ability to communicate through video chat, not being able to be physically present with your loved ones. COVID is really highlighting these simple things, and the loneliness as people are finding their way through this.

Uggs Are Indie Now. I Don’t Make The Rules.
Let Jonathan Van Ness Teach You About America’s History of Voter Suppression
Hari Nef is Still Getting Dressed Up, Even If It’s Just for a Selfie At Home
For Pete Buttigieg, That Final Debate Proved Who Biden and Trump Really Are
How to Be a (Glossier Body) Hero, According to WNBA Star Natalie Achonwa