Hailey Bieber stepped out in a little black dress and a whole lot of diamonds at Tiffany & Co.’s Art Basel party last night in Miami. Hailey wore a three different diamond necklaces from the jeweler along with two pairs of diamond earrings, two tennis bracelets, and a ring. Yes, it was a lot of glitz, but it was incorporated seamlessly. She styled her hair up in a slick bun for the event so the jewelry would take the focus. 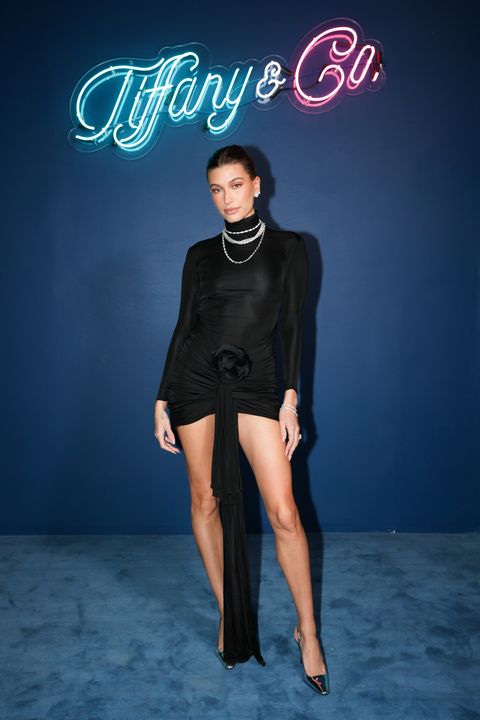 Hailey’s appearance comes just days after she opened up about having an ovarian cyst in a very candid Instagram Story post.

“I have a cyst on my ovary the size of an apple. I don’t have endometriosis or PCOS, but I have gotten an ovarian cyst a few times, and it’s never fun,” she wrote, also putting text over her stomach that said, “not a baby.”

She detailed her symptoms: “It’s painful and achey and makes me feel nauseous and bloated and crampy and emotional. Anyways… I’m sure a lot of you can overly relate and understand. We got this. ✌🏻✌🏻✌🏻”

Hailey was spotted earlier this week on Tuesday with her husband Justin Bieber and good friend Kendall Jenner in Malibu. The three got dinner at Nobu. Hailey was the dressiest of them, pairing a red-orange Isabel Marant off-the-shoulder mini dress with white socks and black shoes. Her husband, in casual contrast, was in a gray hoodie, bright pink beanie, and distressed jeans.

Hailey reflected to Harper’s Bazaar for its September issue about how she copes with her street style being photographed so often by paparazzi.

“I get photographed so much that I feel like sometimes I put pressure on myself,” she said, attributing it partly to her perfectionism. “Even if I’m just throwing on jeans and a T-shirt, I want it to be a dope pair of jeans and a great T-shirt!”

She also said her personal style “evolves every couple of months.”