Netflix’s unorthodox mother-daughter drama Ginny and Georgia is finally speeding toward its season 2. When the show premiered in February 2021, it quickly rose to the streaming service’s Top 10 list and landed the #1 spot for 27 days, enrapturing fans as they watched the antics of Georgia (Brianne Howey) and Ginny (Antonia Gentry) transform from cute to criminal.

Ginny and Georgia follows 30-year-old former Southern belle Georgia, mother to 15-year-old Ginny and 9-year-old Austin (Diesel La Torraca), as she relocates the family to the New England town of Wellsberry following the mysterious death of her husband. Georgia quickly makes friends and enemies in the town, but as her past comes back to bite her, she must deal with the consequences of her decisions. Meanwhile, Ginny adapts to her new environment, struggling with her biracial identity; fitting in with a new group of girls; and repeatedly falling in love. By the end of season 1, relationships were in shambles, and Ginny and Georgia’s easy camaraderie shattered. But hope springs eternal in the suburbs, and there’s always a chance for redemption in season 2. Here’s what we know about what comes next.

Will there be a season 2 of Ginny and Georgia?

Yes. On Monday, April 19, 2021, Netflix officially renewed Ginny and Georgia for a second season composed of 10 hour-long episodes. “We are so appreciative of the incredible response and love you all have shown Ginny and Georgia,” showrunner Debra J. Fisher and creator Sarah Lampert said in a statement. “We’re especially grateful to Brianne and Toni, who set the highest bar every step of the way. We can’t wait to return to Wellsbury for season 2.”

Fisher told Entertainment Weekly in February, “We want to keep talking about Ginny and Georgia for a very long time.”

Who will be in the cast?

Netflix confirmed Howey and Gentry will return for season 2, and many of their co-stars appeared in the season 2 announcement video, virtually confirming their return: La Torraca as Austin, Raymond Ablack as Joe, Sara Waisglass as Maxine, Felix Mallard as Marcus, Scott Porter as Paul, and Jennifer Robertson as Ellen.

What will season 2 be about?

Season 1 chronicled a potent lack of understanding between Ginny and her mother. “Ginny is going through the world in a different way than Ginny is, and Georgia can’t ever grasp that,” Lampert told Oprah Daily in April 2021. “In the same way, Ginny can’t understand the trauma and sacrifices Georgia went through to get Ginny to Wellsbury. There’s a lot of room for them to hurt each other’s feelings with what they can’t understand about each other.” That disconnection curdled further when, in the season finale, Ginny learned her mother could be a possible murderer. Fearful of that information, she did what she knew best: She ran away. The season ended with Ginny and Austin packing their bags and riding off on a motorcycle to an unknown destination.

In a March 2021 interview with TVLine, Gentry answered at least one major lingering question about Ginny’s whereabouts: “If you notice, but when she’s packing her bag, she grabs the book that [her father Zion] gives her, and if you were paying attention when Zion arrives and is giving her the book, you know that he included an address. He has that secret coded message in it, and she finds out that it’s his address to his Boston apartment,” Gentry explained. “I think it’s pretty reasonable to assume that Ginny might be headed toward Zion, but I don’t want to tell people what to think, even though the clues are all there.” It sounds like we’ll definitely see more of Ginny’s father in season 2.

But Ginny’s not the only one with some daddy issues to explore. Also in season 1, the mystery of Austin’s father begins to unravel. When Ginny takes it upon herself to mail Austin’s letters to his dad, Georgia is horrified to learn Ginny put their home address on the letters. We can expect his appearance in season 2 won’t be a simple one.

Finally, season 2 has the potential for fans to learn about how Ginny and Georgia are more alike than they think. Gentry told ELLE.com in March 2021, “I want to see Ginny get down and dirty. I want to see her turn into Georgia a little bit. 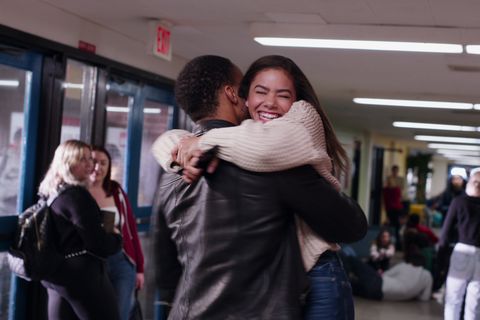 Will Marcus and Ginny get back together?

Season 1 leaves Ginny and Marcus’s love affair on pause. In the finale, Marcus calls their relationship a mistake, then doubles back and apologizes for his choice of words. Marcus notices that something is up with Ginny, but she doesn’t tell him she’s running away. That leaves their relationship in season 2 up in the air.

In March 2021, Seventeen spoke with Mallard about how Marcus will react to Ginny running away in season 2. “It will be a loss all over again and it will be his fault,” the actor said. “There was a funny thing when I read the last scene for me as an actor and the journey of Marcus. I was like, ‘It feels like maybe we should have a bit more. It feels unfinished. We should cap it off in a different way.’ Watching it back, I saw it and went, ‘Oh, that’s perfect.’ Because Marcus does want more and needs more.”

When does season 2 come out?

The long-awaited sophomore chapter arrives on January 5, 2023. Let’s just hope the Oppression Olympics committee sits this one out.

Starr Savoy is a fellow at ELLE.com, where she writes about celebrity, culture, beauty, and fashion. When she is not working, you will find her pumping iron at the gym, watching Netflix’s latest phenomenon, and indulging in retail therapy.

Lauren Puckett-Pope is an associate editor at ELLE, where she covers film, television, literature and fashion.