For decades, the most pertinent question Star Wars thought to ask was usually some variation of, “Who’s your daddy?” For Luke Skywalker, it was Darth Vader, source of the young Jedi’s yearnings and fears. For Vader himself—when he was still the Anakin Skywalker of the prequel films—it was no one; he was immaculately conceived through the Force, source of his hubris. For Rey of the sequel trilogy, it was (unfortunately) a Palpatine. The fatherhood trend has charted a notorious course through numerous other Star Wars chapters, including recent entries like The Mandalorian and Obi-Wan Kenobi. It’s a strange sort of irony, then, that the father of Star Wars itself sold Lucasfilm to the Walt Disney Company in 2012, making Disney the home of—and, if you’ll forgive the metaphor, the father to—all future Star Wars stories. The IP game was afoot.

That is the game in which the prequel film Rogue One landed when it was released in 2016, and where its prequel series Andor still finds itself today. Now more than ever, the Star Wars franchise loves to milk its own nostalgia, often with the through-line of lineage. Disney stock demands that Star Wars continue churning out content that gobbles up fans and their money, and the simplest way to do that is by refurbishing familiar stories and characters with new varnish. Andor, finally, reminded us what fanfiction writers have always known to be true. Projects born of powerful intellectual property need not be stunted by it.

What makes Andor such a fascinating entry in the Disney chapter of Star Wars history is this: The Tony Gilroy-led series is not a nostalgia piece, even if it does capitalize on pre-existing IP. The show launched with comparatively low viewership and is operating on a comparatively modest budget. It has a pre-determined number of episodes ahead, and will not outlast two seasons. Diego Luna’s Cassian Andor is a beloved but not widely recognized figure in the Lucas universe. He’s not a Skywalker; he’s not even Obi-Wan Kenobi. He is a normal man, and—curiously—an orphan. Like Rey before her Palpatine pedigree made itself clear, Cassian has no father. (His father figure, Clem, is long dead.) The most dominating, instructive presence in his life is not an erstwhile parent, or the Force, or a genealogy he’s yet to reckon with. It is the Empire itself. 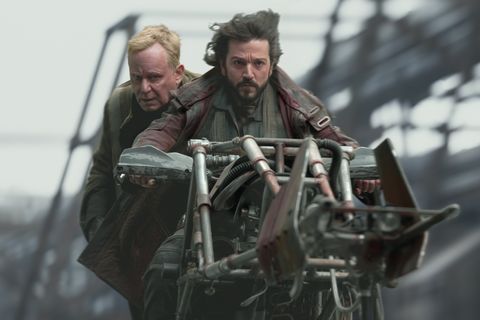 Andor recognizes that Star Wars has always been political, even when its politics were too tidy: Empire Bad. Rebellion Good. So the series cracks open the superficiality of this binary, laying bare the moral sacrifices everyone makes in the wake of revolution. No longer is the hero swept along the tides of rebellion as part of his own self-actualization. No longer can lineage do the work for him. Even as Cassian Andor does discover things about himself and his family, he does so in overtly political positions: As a child whose world is destroyed by Imperial overconsumption. As a renegade profiled by callous guards. In the throes of prison slave labor. His decisions have repercussions far beyond his immediate friends and family, and we get to watch them. As Stellan Skarsgård’s rebel leader Luthen Rael says in one of the late Andor episodes, “I’m damned for what I do. I yearned to be a savior against injustice without contemplating the cost…I burn my decency for someone else’s future.”

Andor’s lesson is that the hero’s legacy, and their lineage, is not theirs alone. The Skywalker saga is so small in comparison to the entire galaxy’s freedom. And so Andor’s excellent finale episode, “Rix Road,” opens with the fittingly gut-wrenching image: A child building a bomb. (Another data point in the fatherhood flow chart: This kid has been radicalized because he lost his dad to the Empire.)

The child’s name is Wilmon Paak, and he’s preparing for a war he knows arrived years ago. The Imperial Security Bureau is closing in on Ferrix, the home world of Cassian Andor, as the locals gather for the funeral of Cassian’s adoptive mother, Maarva (Fiona Shaw). But the Imperials are far from the only ones after Cass’s head: Vel (Faye Marsay), Cinta (Varada Sethu), and rebel leader Luthen Rael are all anxious to see the thief buried, to ensure what he knows about their mission never falls into the Empire’s clawing hands.

There was never any question of whether Cassian—a fugitive again, following his daring prison escape in episode 10—would return to Ferrix for the finale, yet he’s arrived not only to honor Maarva’s memory but to rescue his ex-girlfriend Bix Caleen (Adria Arjona). The salyard operator has been captive to the Empire and their screaming-child torture machine for far too long now, and by the time Cassian shuttles her to safety she’s barely sentient.

Meanwhile, on Coruscant, Mon Mothma (Genevieve O’Reilly) is facing equally momentous struggles. The Empire has taken an interest in her family fortune, problematic given that she’s secretly pouring money into the Rebellion. To throw the Imperials off her scent, she concocts a brilliant, desperate plan: During a ride through the sparkling airways of Coruscant, she accuses her husband, Perrin (Alastair Mackenzie), of taking up gambling again. Mon suspects that her new chauffeur is an Imperial spy, and she’s right to assume he’s eavesdropping on her private conversations. So she uses Perrin’s general ineptitude against him, and successfully convinces the Empire that her debts are thanks to a lying spouse, not a burgeoning coup.

But that doesn’t solve her money woes entirely. She still needs to cover her debts, and her best option is the skeevy Chandrilan banker Davo Sculdun (Richard Dillane), who agrees to facilitate if Mon is willing to introduce her own 13-year-old daughter to his 14-year-old son. (Chandrilan tradition encourages child marriage; Mon herself married Perrin at the age of 15. Introducing Leida to Sculdun’s son is as good as guaranteeing their betrothal, especially given Leida’s recent signs of indoctrination in earlier episodes.) It’s a terrible sacrifice, one of many throughout Andor’s morally nuanced first season.

Others are feeling the rebellion squeeze them, too. Vel, Mon’s cousin, can barely get Cinta to look at her long enough to remember they’re in love. And Cassian himself is batting away regrets, convinced he never should have left Maarva alone on Ferrix. His friend, Brasso (Joplin Sibtain), reminds him that he “knows everything he needs to know and feels everything he needs to feel.” The rebellion is no longer his private fight; now, it’s in his blood. His old Aldhani pal, Nemik (Alex Lawther), stokes these fires with a pre-recorded manifesto: “Even the smallest act of insurrection pushes our lines forward,” he dictates. “The Imperial need for control is so desperate because it is so unnatural. Tyranny requires constant effort. Authority is brittle.”

These movements converge, finally, during Maarva’s funeral, which begins early thanks to some premature anvil-clanging from the town bell-ringer. More mourners than the Empire approved gather in the streets, and it soon becomes apparent that ISB officer Dedra Meero (Denise Gough) and her men have only superficial control of the gathering. (Do I smell a metaphor?) The parade progresses down Rix Road, and B2-EMO unveils a holo-cast of Maarva in the days leading up to her death. She addresses the audience of friends and family with a warning, and a call to arms. “There is a wound that won’t heal at the center of the galaxy,” she tells them. “We let it grow, and now it’s here. It’s here, and it’s not visiting anymore. It wants to stay.” She finishes her rousing speech as Cassian and the Imperials evade one another. “Fight the Empire!”

In the center of Rix Road, all hell breaks loose. Wilmon Paak throws his bomb as former ISB employee Syril Karn (Kyle Soller) sprints to save Dedra. The street erupts in dust and shrapnel. The Stormtroopers unleash fire. People die, and Andor lets us see it. As Cassian hauls Bix to safety, Syril does the same for Dedra, who can’t seem to fathom what her eyes are telling her: That her former stalker has rescued her from a Ferrix mob. Cassian carts his friends to the shipyard, where Bix, Brasso, Wilmon, B2-EMO and Co. escape from Ferrix to Gangi Moon. Cassian does not go with them, much to Bee’s whimpering chagrin.

Instead, he finds Luthen Rael’s ship, and intercepts Luthen as the rebel prepares to evade Imperial capture once more. There, Cassian gives his one-time recruiter a simple choice: Kill him, or enlist him into the cause. This time for real. No strings attached. No turning back. All together now. Luthen’s smile tells the audience everything we need to know.

And still, that’s not the end of the episode. The credits roll, and Star Wars takes a page from Marvel (another Disney entity) in the form of a post-credits scene. In this seconds-long epilogue, a pair of sparking droid hands appear, and the camera pans back to reveal numerous robots hauling the strange gear-like metal pieces Cassian and his fellow inmates assembled in the Narkina 5 prison. As it turns out, those gears are pieces to a weapon of mass destruction. Cassian and his fellow prisoners were, unbeknownst to them, building the Death Star.

Could there be a more ideal ending to Andor’s first season? It’s twisted; it’s obscene. It makes perfect sense. That Cassian and his crew would labor on behalf of the space station he’d soon die trying to destroy is so fitting it’s almost musical. And it speaks volumes about the direction Gilroy has attempted to wrench the Star Wars universe toward: The IP will only survive if its chapters evolve beyond—and perhaps even eclipse—their predecessors. And the best way to evolve IP is to interrogate it. How did this happen? Who built this system? Who won, who suffered? We already know the Empire is evil, and the Rebellion good, but how did they come to be viewed that way? Why? Nostalgia can be a source of inspiration, if it does not first become a trap.

Star Wars is still all about its sacred IP, its characters’ lineage. It is still about paternity, the present’s responsibility to and impact on the future. But Andor proved that our understanding of what that means can and should change. Cassian Andor is not necessarily a more interesting hero than Luke Skywalker, nor Anakin, nor Rey. He is a different face on the same die. But Andor thought to ask a different question of him: Not “Who’s your daddy?” but “Why does it matter?”

Lauren Puckett-Pope is an associate editor at ELLE, where she covers film, TV, books and fashion.